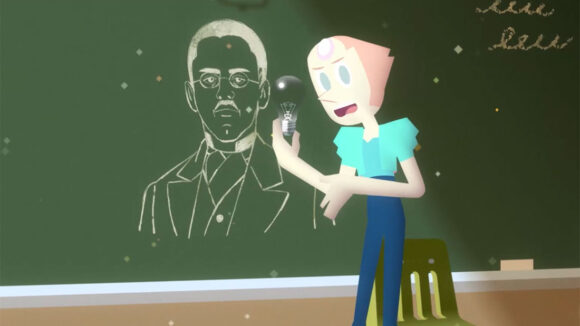 Nine months after the series finale, Steven Universe keeps delivering. The beloved Cartoon Network show has inspired a run of PSAs in which its characters draw attention to various aspects of systemic racism. The videos are directed by Rebecca Sugar, the show’s Emmy-nominated creator, and her husband Ian Jones-Quartey, the creator of OK K.O.! Let’s Be Heroes.

The latest in the series, titled “Tell the Whole Story,” was posted on Cartoon Network’s Youtube and social media accounts on December 3 and went viral the following week, driven by a big reaction on Tiktok. In it, Pearl teaches a class of schoolkids about the crucial scientific contributions of African American inventor Lewis Latimer, before reflecting on the general whitewashing of history. Watch it below:

The first PSA in the series, “Don’t Deny It, Defy It,” launched in October. It features Garnet — who, like Pearl, is a Crystal Gem (an alien group) — warning that racism is not always visible to everyone. On a subtler level, the video also strives to normalize gay love.

“Tell the Whole Story” riffs on the fact that Pearl, as an extra-terrestrial, has perspective on our problems: “I worry about you humans, because you only live, what, about a hundred years? You rely on these stories to know your own history!” Both videos are playfully self-reflexive, initially showing the characters acting in PSAs, before speaking their minds “off-camera” and drawing out deeper lessons for the audience. The reactions online have been broadly positive:

But, damn, they are not pulling punches. I'm guessing kids are gonna handle these better than most of their parents. https://t.co/avULZNIhOx

Reason number infinity why Steven Universe is the best. 💖 https://t.co/ddQs74rofx

The use of established cartoon characters in PSAs is nothing new. Episodes of the 1980s series G.I. Joe: A Real American Hero famously ended with public safety lessons which birthed the catchphrase “Knowing is half the battle.” In the 1940s, Disney and Warner Bros. characters were enlisted to encourage citizens to contribute to the war effort. Last month, the protagonists of the hit Malaysian franchise Boboiboy teamed up with the country’s director general of health to drive home medical advice in the pandemic.

Yet Steven Universe is well suited to the anti-racist message — over five seasons (and a few spin-offs), the show consistently promoted a message of tolerance and inclusivity. The PSA series has simply made that message explicit. It will run to four videos in total; Cartoon Network has set up an accompanying website, which features links to organizations involved in anti-racist campaigning.

The PSAs are part of a broader social justice initiative by Cartoon Network that also includes a partnership with the National Black Justice Coalition (NBJC). Through that partnership, a mini-comic drawn by Steven Lowe launched today featuring Craig (from Craig of the Creek), Chloe (We Bare Bears), and Stevonnie (Steven Universe), who learn about gender, respect, and belonging.

“This comic was created to embrace and acknowledge the role of selfhood and inclusion,” says NBJC’s YYAAC member Justin Calhoun. “This partnership between NBJC and Cartoon Network is an act of visibility that centers the needs of queer youth to ensure that they are not only accepted, but also thriving!”

The entire comic can be read on Cartoon Network’s Facebook page.