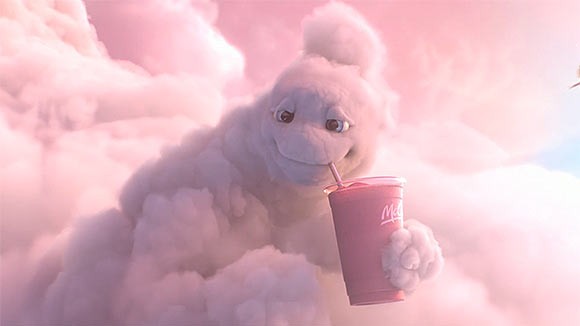 McDonald’s released a CG-animated commercial a couple days ago that has begun to draw attention online for the wrong reason: viewers think it visually resembles the 2009 Pixar short Partly Cloudy.

The spot, “Clouds,” was conceived by the Kansas City-based ad agency Bernstein-Rein and directed by Steve Beck and Nic Yiallouris at Mill+, which is the commercial arm of the vfx shop The Mill.

Here’s what people are saying about it on Twitter:

@MillChannel @McDonalds @Bernstein_Rein Any comment on the remarkable "similarity" to a certain well-known short film?

Thematically, the Pixar short and the McDonald’s spot couldn’t be more different. In Peter Sohn’s Partly Cloudy, clouds make babies of all species, which are then delivered by birds, while in the McDonald’s spot, the clouds drink McCafe beverages (presumably pissing them out afterwards as “rain”). But visually, the similarities are more obvious, from the dreamlike pastel production design to the staging of the action. The first shot of the McDonald’s spot is disconcertingly similar to how the clouds are introduced in Partly Cloudy, with birds flying toward a cloud, who turns around to reveal itself as a character.

The ideas were so different to begin with, one can’t help but wonder why the team at Mill+ so closely followed the art direction and staging of the Pixar short. If a company has the budget to produce a commercial at this standard of quality, it wouldn’t have required that much more effort to visually distinguish the work as their own unique creation, especially since the clouds themselves are designed distinctively so as to avoid easy comparison to the Pixar film. Was this, therefore, an ad agency’s decision to fool viewers into believing that Pixar characters were selling them McCafe drinks? Or is there another story?

McDonald’s, for its part, has been caught ripping off artists in the past. In the 1970s, TV puppet producers Sid and Marty Kroff successfully sued the fast food chain and won a $1 million payout after a court ruled that a McDonald’s ad agency stole their puppet techniques for a series of “McDonaldland” commercials.

UPDATE (4/21/15): Multiple artists from different commercial houses have confirmed in our comments that McDonald’s and its ad agency, Bernstein-Rein, specifically referenced Partly Cloudy when soliciting pitches for the project. A Brew commenter, The Masked Director, wrote, “When I received this brief where partly cloudy was the only reference, I made it my goal to avoid referencing it, going for a different design/technique, in order to make this film something else… I was told ‘great thinking, we love it but the client wants to go for something more cg like the brief…'”

We’ve reached out to the ad agency Bernstein-Rein for comment.

Meanwhile, Noah Klocek, the production designer of Pixar’s Partly Cloudy, tweeted out his view about the commercial this morning: