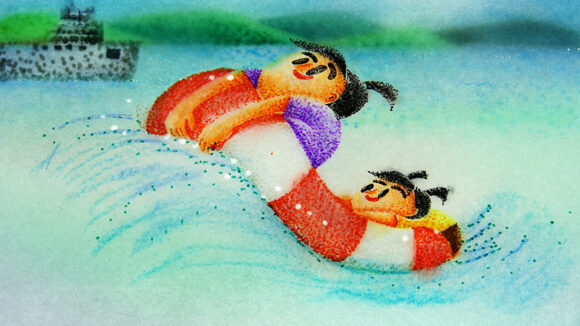 Films from Japan and Brazil took home the top prizes at the 45th edition of the Ottawa International Animation Festival, North America’s longest-running and most prestigious animation festival. For the second year in a row, the event was held virtually due to ongoing pandemic concerns.

The grand prize for short animation was presented to the Japanese short A Bite of Bone, directed by Honami Yano. The film, drawn with an ornate pointillist technique that is uncommon for animation, tells the story of a little girl reflecting on the last summer with her father at his funeral.

A Bite of Bone was produced by Koji Yamamura through his indie studio Au Praxinoscope. Its win at Ottawa now qualifies the film for Oscar contention this fall.

The short jury, made up of Jodie Mack (United States), Anne Koizumi (Canada), and Kangmin Kim (United States), offered this statement on why they selected Yano’s film for the top prize: “This film was made on top of traditional techniques. But it has the power to lead us in a new direction. In an image composed of dots, we freely cross places and memories as if we are all small dots. After looking at the work, we can see why the director used these techniques. And it leaves a long lingering impression.”

On the feature side, the Brazilian stop-motion effort Bob Spit – We Do Not Like People, directed be Cesar Cabral, took home the top prize, marking the first time that a feature from Latin America has walked away with Ottawa’s feature prize. Incidentally, the honorable mention in the category also went to a Latin American feature: Gabriel Verdugo Soto’s Elulu from Chile.

Based on the work of Brazilian cartoonist Angeli, the meta-film Bob Spit flips between an animated version of the cartoonist and his creations. The feature jury, comprised of Mike Maryniuk (Canada), Nadja Andrasev (Hungary), and Mariusz Wilczyński (Poland), said that it chose Cabral’s feature “for its melange of mainstream and DIY, documentary and fiction, ingenious and visually attractive story of an artist and his universe.”

This year’s most celebrated Canadian short was Zacharias Kunuk’s 21-minute stop-motion entry The Shaman’s Apprentice, which came out of the event with two awards: the Canadian Film Institute Award for Best Canadian Animation along with the prize for narrative short. The film was also awarded at Annecy earlier this year and was part of the official selection at the Toronto Int’l Film Festival.

Produced in the Inuktitut language, Shaman’s Apprentice is about the traditional Inuit role of the shaman and follows a grandmother and granddaughter who travel to the underworld in an effort to heal an ill young hunter.

The festival received 2,528 entries from 38 different countries for its 2021 edition. Winners were chosen from the 107 animated works selected for official competition.

Here is the complete list of winners from the 2021 edition:

NON-NARRATIVE ANIMATION
Anxious Body, Yoriko Mizushiri, France/Japan
Jury Comment: Without visual texture, the film touches our bodies through its visceral fusion of the subconscious, unconscious, and conscious states of the mind and body.

NARRATIVE SHORT
The Shaman’s Apprentice by Zacharias Kunuk, Canada
Jury Comment: The Shaman’s Apprentice is a masterful work of storytelling and the sharing of traditional Inuit knowledge utilizing impeccably detailed sets, costumes, props and puppets and told beautifully with precision and care. Using the Arctic landscape as a metaphor to the spiritual world, Zacharias Kunuk invites us to learn about Inuit shamanism and spirituality, a part of Inuit culture that was hidden for so long by colonialism. Like the Shaman, Kunuk transmits his knowledge and teachings through this film, and it is as if he is turning to us at the end and asking, “What have we learned?”

BENTO BOX AWARD FOR STUDENT ANIMATION
Space by Zhong Xian, United Kingdom
Jury Comment: Space moves us through the cyclical nature of falling in and out of love with swooping shots, original and playful transitions, a simple yet bold and expressive style, and shows us that love, like animation, can be a cycle that repeats itself.

BEST SCRIPT
All Those Sensations in My Belly by Marko Djeska, Croatia/Portugal