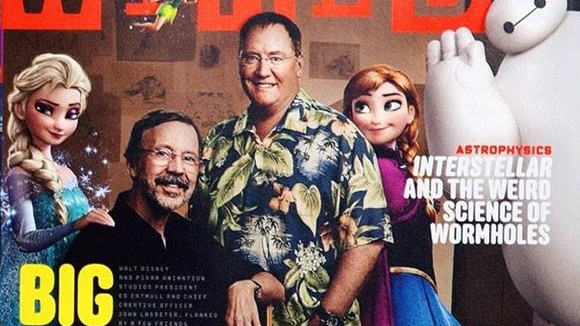 To accompany its fawning story on the success of Walt Disney Animation, Wired is promoting John Lasseter and Ed Catmull as “big heroes” on its cover (Big Hero 6, clever huh?). While this may not be as bad as the time that Vogue (also from Wired’s publisher Conde Nast) called the wife of Syrian dictator Bashar al-Assad a “rose in the desert,” it’s still bad. Catmull’s central role in the animation wage-theft cartel have led to multiple lawsuits, which are just getting underway. His actions allegedly robbed thousands of employees of wages and career advancement opporutnities not just at Pixar, but also Disney, DreamWorks, Sony Pictures Imageworks, Digital Domain, Lucasfilm, and Imagemovers, among other studios.

Somehow “big hero” doesn’t sound right for someone who may have spearheaded one of the largest acts of criminal wrongdoing in animation history. Let’s wait to see if he can first clear his name before dropping superlatives on him.