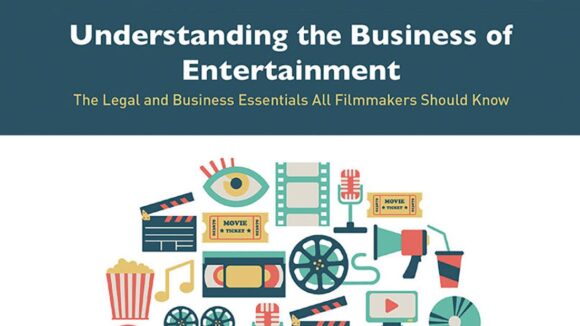 While the creative side of American filmmaking gets most of the media spotlight, filmmakers who ignore the business side of any project do so at the risk of subverting their own films, both creatively and financially. Compounding the danger, artists sometimes lack the business skills that would help them navigate the process of obtaining financing for their projects, securing distribution, and ensuring they receive their share of any profits. A good place to start to understand these issues is Gregory Bernstein’s informative book, Understanding the Business of Entertainment: The Legal and Business Essentials All Filmmakers Should Know,

Bernstein graduated from UCLA Law School and practiced law at top Los Angeles-based international firm O’Melveny & Myers, then joined Columbia and Tri-Star Pictures as a vice president in the business affairs departments. Later, he entered film school at the American Film Institute, earning an MFA, after which he wrote screenplays for Robert Redford and Charlize Theron.

The topics, which might seem dry bordering on parched in a less-adept writer, are here presented in a conversational way that avoids getting lost in detail.

The book approaches its broad subject by first discussing copyright, music copyright, international copyright, and the First Amendment, grounding the book with a legal foundation. Bernstein uses the first couple of pages to describe the history of copyright – and even explains why such writers as Dante and Chaucer never cared about copyright, and how the Gutenberg press spurred the concept forward.

Bernstein also explains the three-part test the courts use to determine whether a work is obscene within the law (and thus not protected by the First Amendment). He describes the basics of libel and slander law, useful information for any cutting-edge artist.

Bernstein wraps everything up with a section on finance and contracts, and explains concepts such as foreign pre-sales, tax incentives, and gap financing.

As one example of Bernstein’s ability to explain complexities simply and effectively, this passage teaches about radio signals:

Why did radio lay the groundwork for the FCC? The answer lies in the physics of radio broadcasting… As you no doubt know, radio signals are transmitted via radio waves, which form only one portion of the spectrum of electro-magnetic radiation. You’ll recall from your basic physics class that electro-magnetic radiation moves all around us at a wide range of different frequencies. When those frequencies are between 380 and 760 nanometers in length, the radiation interacts with our eyes, allowing us to see the radiation as visible light. Waves with much longer frequencies, from around a meter in length or more, make up radio waves. We can’t see this radiation, but scientists discovered that we can use it to transport sound and video images over large distances.

Bernstein then describes how Congress used the Commerce Clause of the Constitution to justify their regulation of the radio waves.

The final chapter presents one-on-one interviews with industry types, including Michael Poryes, sitcom writer with credits on The Jeffersons and Roseanne, and Cynthia Kanner, head of post-production for films and mini-series at HBO. They discuss their beginnings and the qualities necessary to succeed in the American film industry, but the chapter seems almost out place in a book that seems geared more to working professionals than aspiring students.

Of course, any book that covers such a broad array of topics will suffer by the shallowness such an array demands. It’s impossible to discuss in much detail the nuances of gross and net points. More so because Bernstein manages to cover all of this in a brisk 295 pages.

Sometimes where the book does go into detail, the details themselves – such as Guild minimums in their agreements with the studios – will be outdated by the time the Guilds negotiate new contracts (in fact, the Writers Guild negotiated its new agreement with the studios earlier this year). But that’s what new editions are for, isn’t it?

And to complain about shallowness is to miss the point. Understanding the Business of Entertainment provides a strong foundation for understanding the business of American entertainment. It helps filmmakers to know which questions to ask, and to recognize when the answers they get sound a little less than trustworthy. And in the entertainment business, that can come in rather handy.

Order Understanding the Business of Entertainment: The Legal and Business Essentials All Filmmakers Should Know