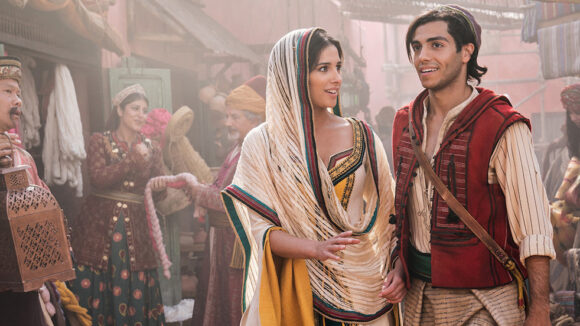 Disney’s live-action/cg hybrid remake of Aladdin surpassed expectations for its opening at the domestic box office, benefitting from the Memorial Day Weekend holiday in the United States. The Guy Ritchie-directed film had a four-day gross of $112.7 million on 4,476 screens.

Results like this will only encourage Disney to continue cranking out these revamped versions of their animated classics. Up next is the photoreal-animated remake of The Lion King, opening on July 19, which could potentially be an even bigger hit. Earlier this year, Disney opened Tim Burton’s Dumbo to middling reviews and unimpressive grosses.

Reviews for Ritchie’s Aladdin were better than anticipated considering the negative reactions that Will Smith’s portrayal of the Genie originally received. Still, with a current Rotten Tomatoes score of 58%, it’s far from a critical hit. Audiences, however, felt differently and awarded the movie an “A” Cinemascore, a grade determined by polling moviegoers around the country on opening night.

Now in its third weekend, Warner Bros. hybrid animation/live-action feature Pokémon Detective Pikachu grossed $17.2 million over the four-day, bringing its domestic total to $120 million. Combined with its international box office, the American film based on the popular Japanese video game and anime franchise has made $358.1 million.

Another vfx-supported film debuted in the top ten this weekend: the Screen Gems superhero horror feature Brightburn launched in the no. 5 spot at the U.S. box office taking in $9.6 million on a modest $6 million budget. The vfx in the film was produced by German firm Trixter.

June looks more promising for animated projects in terms of a variety of offers with the limited theatrical releases of Netflix’s Pachamama and GKIDS’ Funan, and ultra-wide releases of Disney/Pixar’s Toy Story 4 and Illumination’s The Secret Life of Pets 2.