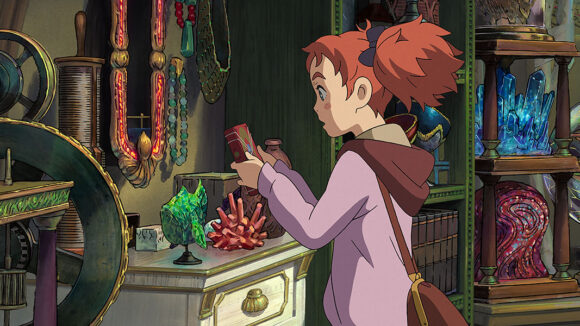 After just four days of release, Mary and The Witch’s Flower has set the all-time box office record for a release by indie animation distributor GKIDS. The film has grossed $1.5 million since being released last Thursday.

The Hiromasa Yonebayashi-directed film, which marks the first release by Japan’s Studio Ponoc, has had an unconventional release pattern. On Thursday, the film had a special one-night screening in 573 theaters, done in partnership with Fathom Events. It grossing $1,167,431 from those screenings. The Thursday release included a bonus interview with Yonebayashi attached to the front of the film, as well as exclusive giveaways at select locations.

Then, for the Friday through Sunday period, Mary settled into a more traditional release pattern, screening in 161 theaters and earning $329,097.

The $1.5M launch easily tops the previous GKIDS champion, From Up on Poppy Hill, which squeaked by the $1 million mark in 2013. The strong debut also reverses a streak of recent underperformers from GKIDS, which have struggled to make an impact with American viewers – The Breadwinner ($242,266), Napping Princess ($48,198), Birdboy: The Forgotten Children ($25,434), and The Girl Without Hands ($21,787).

Based on Mary Stewart’s 1971 children’s book The Little Broomstick, the dubbed version of Mary and the Witch’s Flower features the voices of Kate Winslet, Jim Broadbent, and Ruby Barnhill.