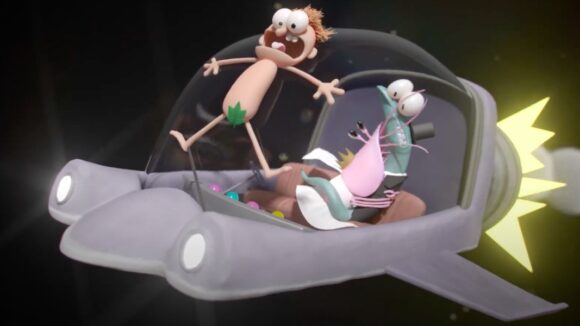 Picture God as a stressed software developer working from home, trying to create the world on inadequate hardware while baby Jesus screams in the background. It sounds like a note-perfect send-up of working in the pandemic, but it isn’t: Tales from the Multiverse was produced before “coronavirus” had entered our vocabulary.

The film, which Cartoon Brew is exclusively premiering online, is rather a satire of creation myths and other religious articles of faith. The six-minute short gleefully mashes together prehistory, creation myths, and conspiracy theories, as dinosaurs collide with cavemen, Adam with aliens. Watch it below:

The film was made at Tumblehead, a studio based in the dynamic animation campus in Viborg, Denmark. As in their previous work, which includes festival hit Rob ‘n’ Ron and a short animated profile of Martin Luther, Tales from the Multiverse recreates in cgi a zany cartoonish sensibility reminiscent of the Cartoon Modern era. While its references are classic, the pipeline is contemporary: for the first time, Tumblehead turned to global freelance platform Artella to assemble its crew.

Why this style, and what challenges does it bring? How did Artella help? Cartoon Brew put these and other questions to the film’s three directors, Magnus Møller, Mette Tange, and Peter Smith (who happen to run Tumblehead)…

Cartoon Brew: You say the film is inspired by various religious ideas and conspiracy theories about the origins of the world. What appealed to you about this subject?

Magnus Møller: Growing up in a religious environment, I tried to fit in. I spent countless hours as a teenager thinking about how the scriptures could be true, but I could never really make sense of it, until I figured it all out — enter Tales from the Multiverse. Since then I developed an interest in conspiracy theories, not because I believed in them, but because of how powerful and seductive they are. Just like religion, they have the power of myth.

Like your other work, the film has a cartoonish sensibility that harks back to classic 1950s cartoons. Why do you like this style? What creative freedoms does it offer that 2d animation doesn’t?

Møller: It allows us to approach rigging and animation in a completely different way. It’s something we have iterated on through the years, and there are always new things to explore.

Peter Smith: I don’t know if it necessarily offers any creative freedoms that 2d doesn’t. 3d just gives another overall look. We like both though.

What challenges does this kind of design and animation pose in cgi?

Mette Tange: Cheating is fun! In posing these “flat” designs, the key words are strong posing with a clear silhouette. This might seem simple and straightforward, but every pose has to be designed strictly towards the camera. The power is in the cheating: rotate? Scale? Translate? If it looks good, it works! A pose might look lovely from the camera angle but from a different angle it will be unrecognizable.

The same goes for the animation process: it’s all a cheat! Luckily these kinds of designs scream for toony animation with fast movements, solid timing, and crisp spacing. This makes it possible to hide what you don’t want people to see.

Last time we spoke, you said, “For each new project we always decide on a focus area where we want to improve and reinvent ourselves.” What area was that in this project?

Møller: This time around, the pipeline was a huge one. We are used to working in-house, but in this production we tried something called Artella, which is a webpage where you can pitch your idea and collaborate with artists around the world. We ended up being over 30 people working on the film from all over the globe. It was a challenge to build a pipeline for that which could work on top of what we had already set up.

Smith: If you manage to set up a pipeline that can make it work, I think you can do a lot of incredible stuff with people you don’t usually get to work with. It was a lot of work, but all worth it I think. We met a lot of really talented people this way and expanded our network immensely. We posted a pitch video on Artella telling a bit about ourselves, the project, and what type of artists we needed. In the next few weeks we were contacted by around 400 artists. We selected around 30 of them for the project.

Møller: Other than that, this film had a lot more characters than normal, so we developed an “uber-rig” that could transform into all the human characters. This project was also the first time we used Houdini. That was a steep learning curve, but once we got the hang of it, it proved to be a great asset for assembling scenes and creating effects.

The film is supported by The Animation Workshop. What are your ties to the school and the wider Viborg campus that you’re a part of? What are the advantages of this campus setup?

Smith: We’re all former students at The Animation Workshop, and actually set up the studio right next to the school. Working here has proved to be a really good decision for many reasons. We get to still be a part of the community that started it all for us as artists — it feels like a big family of sorts. We get to build a relationship with the students, which has helped us grow a network of very talented people. I like to think it also works the other way around, because having us around gives the students an idea of some of the directions you can choose in this business.

We’re just one of approximately 30 small animation studios that set up shop in the same building, which creates a nice feeling of being in a community. Most of us have a history with The Animation Workshop, and somehow that creates a common language and the urge to share knowledge and creativity. To put it in another way, it doesn’t really feel like we’re in competition. Instead, we often team up and help each other out on projects.