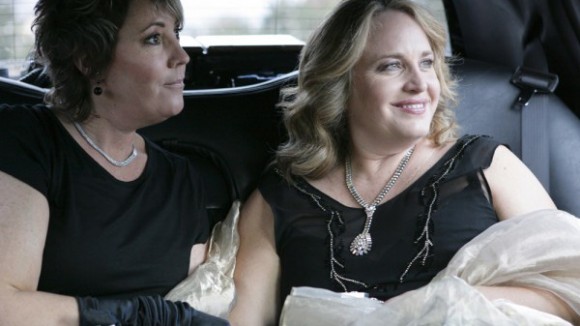 With LGBT Pride festivities taking place all over the country this week, the San Francisco Gate got together with Pixar power couple Kori Rae and Darla K. Anderson to chat about their relationship, the recent Supreme Court strike down of the Defense of Marriage Act (DOMA), and the box office opening of Monsters University, which Rae (above, left) produced.

The twice-married (to each other), domestic-partnered producers and self-described “Pix-Mos”, Anderson (Monsters Inc., Cars, Toy Story 3) and Rae (Up, The Incredibles) started dating in 2001 during the production of Monsters Inc. and when they eloped in 2004, infuriated their family and friends, including Steve Jobs. “I remember Steve Jobs was mad,” Anderson recounted. “He said, ‘I can’t believe you didn’t invite Laurene and I to come down to City Hall to be with you guys.'”

“I was willing to leave the company at that point,” said Rae, expecting professional consequences to their new romance. “But [Pixar was] completely great. They were nothing but supportive, and have been the whole time.” The two maintain the sanity in their relationship by never working on the same film and maintaining strong boundaries. “It’s hard enough making one of these giant movies, and you put your heart and souls into them,” Anderson explained. “If we carried too much of that at home, we would just turn into animated characters ourselves.”

When asked if there will ever be (or has been) a gay character in a Pixar film, Anderson replied, “Our goal is to create great art, and if we’re telling true stories with great characters, people will project and identify with a lot of our films. A lot of people feel like a lot of our characters are gay, and have projected their stories onto it. If we’re doing our job right, that’s what should happen.”