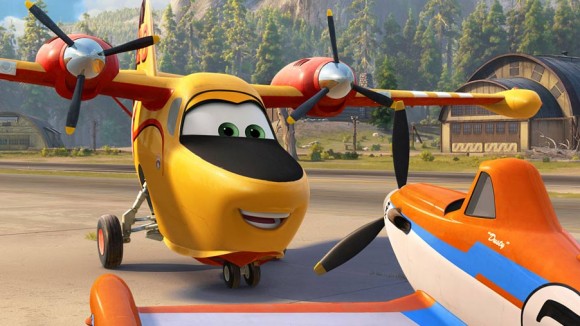 Like its predecessor, Planes: Fire & Rescue opened in third place at the U.S. box office. The new film, however, grossed only $18 million, or 19% less than the opening of the first Planes.

When it comes to the Planes series though, box office is an inconsequential metric. The films are designed to be 90-minute toy advertisements, and they succeed brilliantly on those terms. In 2013, Planes was the second-fastest growing toy license, trailing only Despicable Me (according to the market research firm NDP Group), and in the first quarter of 2014, Planes was the third-fastest growing license, behind Despicable Me and Frozen. Not to mention that the first Planes grossed $70 million in DVD/Blu-ray sales in addition to the $220 million it made in global box office gross. Disney’s success with this franchise extends far beyond the box office, and they’ll be making Planes cartoons for some time to come.

For the second weekend in a row, the Andy Serkis-starring, animation-filled Dawn of the Planet of the Apes held the top spot at the U.S. box office with an estimated $36 million. The film has now grossed $139 million in the U.S. and an additional $101.5 million overseas.

How to Train Your Dragon 2 dropped to eighth place with $3.8 million in its 6th frame. The DreamWorks sequel has now grossed $160.7 million in the United States, and $223.9 million internationally. Its current global gross stands at $384.6 million.