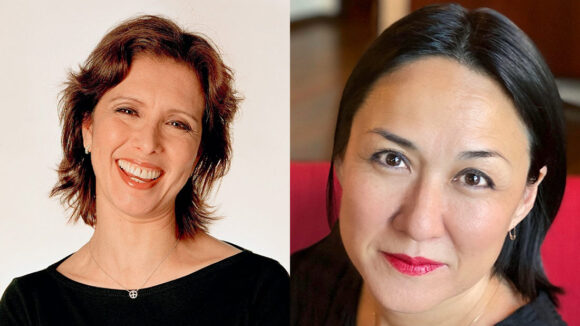 She is being replaced by Ramsey Naito (top, right), who was recently promoted to president of Nickelodeon Animation.

Soria had taken over Paramount’s nascent animation operations in 2017, where she’d overseen the production of Wonder Park and The Spongebob Movie: Sponge on the Run. She was overseeing a significant slate of upcoming features including the monster-wrestling film Rumble, an adaptation of Laurence Yep’s fantasy novel The Tiger’s Apprentice, and Ron Howard’s animation directorial debut The Shrinking of Treehorn.

Soria also made headlines in 2019 when John Lasseter was hired as the head of Skydance Animation, which had an output deal with Paramount. She reportedly told her staff they would not have to work with Lasseter if they didn’t want to, and told her team that they would no longer provide any feedback on the development of Skydance’s feature Luck. Since then, Luck has been picked up by Apple as part of a multi-year overall deal with Skydance Animation.

Naito will continue her duties at Nickelodeon, in addition to her new duties at Paramount. Both Nickelodeon and Paramount are subsidiaries of ViacomCBS.

“Ramsey is one of the savviest executives and creative minds in our industry,” Brian Robbins said in a statement. “During her time at Nick, she has transformed and reinvigorated the animation studio division with her sharp business instincts, deep stable of relationships and unique eye for great storytelling, and I’m thrilled to have her bring her talents to this expanded role where she can further elevate our overall animation business.”

Naito is also not a stranger to Paramount Animation. Back in 2018, prior to joining Nickelodeon, she was hired as an executive at Paramount, and ironically, reported to Soria, who she is now replacing. In that role, Naito oversaw the development of Sponge on the Run. Since moving to Nickelodeon in late 2018, she is credited with spearheading the studio’s largest production slate in history.

New Nick shows launched under Naito’s watch include Kamp Koral: Spongebob’s Under Years, Baby Shark’s Big Show!, Santiago of the Seas, and Middlemost Post, with other high-profile projects in the pipeline, like Star Trek: Prodigy and Seth Rogen’s revival of Teenage Mutant Ninja Turtles. Dozens of other projects are currently in various stages of development and production at Nickelodeon, with the studio hiring over 500 people during the pandemic.