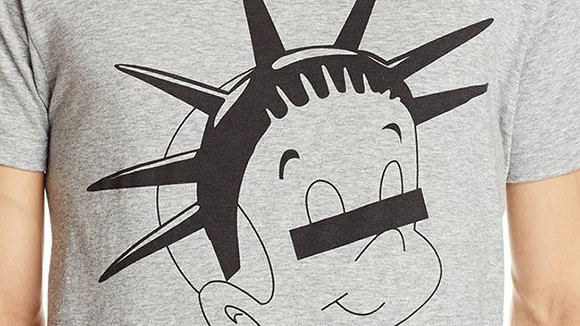 The clash presumably refers to the violent confrontation that will occur between you and your wallet, should you actually decide to purchase one of these items. DreamWorks Animation teamed up with — that is, probably paid — designers Billy Reid, Ernest Alexander, Michael Bastian, Ovadia & Sons, Public School, Robert Geller, Timo Weiland, and Todd Snyder to create a 16-piece capsule line of tees and hoodies ranging between $75-$150. Although, more interesting characters like Underdog and Felix the Cat are also involved, the price tag for any of these items beggars belief.

Between paying its designers and manufacturers, it’s hard to imagine that DreamWorks is going to make any money back on this deal, which makes it a marketing scheme designed to find ways to reboot these somewhat exhausted characters for 21st-century audiences. (The company owns all of these properties through its DreamWorks Classics portfolio.) After all, masculinity icons like He-Man and wealth (mis)managers like Richie Rich skew strange and anachronistic in an era whose multitudinous diversity and identity transformations barely resemble that of the 20th century in which they were created.

And while Martin Handford’s gloriously disorienting books make for great art and games, who can or is going to drop $75-$150 on a reimagined Where’s Waldo T-shirt or hooded sweatshirt? Indeed, how many of these do DreamWorks Animation have to sell to recoup their investment? And if not, how many of these are going to produce a viable vehicle for a future animated series or feature? It’s a lot of money to spend on mere homage.

“Our library of diverse characters includes a host of heroes, trailblazers and misfits that make an unlikely complement to these leaders in men’s design,” said Brian Robinson, DreamWorks Animation’s head of creative, design and development, via press release. “The collision of these icons of pop culture with those of the fashion industry has resulted in a fun and irreverent collection we’re thrilled to share with Amazon’s millions of customers.”

While there may be some cultural capital to wring out of DreamWorks Animation’s purported intention “to inspire a clash between designer and subject,” this is a merchandising play for geeks who may not even exist. Ironically speaking, who will drop a hard-earned Benjamin on anything Richie Rich from Bastian or Ovadia, while the elitist character’s newest live-action series is a one-star flop with Netflix viewers? Would you want to know them?

In the final analysis, DreamWorks can give designers free rein to create “artistic reinterpretations” of these characters for too much money to pay so soon after The Great Recession, but what will they get in return — other than this snarky column, that is? Will they actually be able to move these pieces? Will the New York Men’s Fashion Week reboot of He-Man create an opening for another series? It’s all too much. Literally.