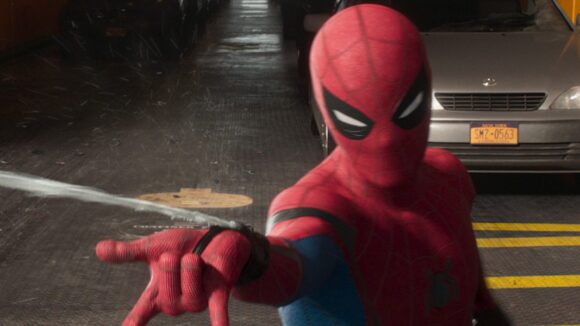 One of the big differences in Jon Watts’ Spider-Man: Homecoming from the previous Spider-Man films is that its hero character spends much less time swinging between New York’s skyscrapers. Instead, Peter Parker (Tom Holland) finds himself in many other places, including at one point on a Staten Island ferry.

It’s here that Parker, as Spider-Man, encounters Adrian Toomes, or Vulture (Michael Keaton), a salvager who has found ways to re-purpose alien tech as weaponry and as a winged suit that enables him to fly. After a fight on the ferry, a loose canon – literally – causes the ship to split in two, and Parker must try and save everyone on board.

Cartoon Brew went behind the scenes with the previs team from The Third Floor, and the visual effects crew at Digital Domain, to find out how the ferry scene was made and how a fresh approach to the motion of Spider-Man played a big part.

One of the initial challenges of the ferry sequence was orchestrating a fight between Toomes and Parker within the confines of the moving ship. Although eventually Toomes flies off from the ferry and widens the scope of the fight, he initially battles Parker amongst the car hold and later on its deck. This was prevised by The Third Floor.

“The characters were all within a confined space and Spidey didn’t have buildings to web to,” said Third Floor previs supervisor Javier Lopez-Duprey. “Put him too far from the ferry and he wouldn’t be able to return. So we kept him quick on his feet and jumping around to dodge shots. If Vulture would try to pull him away, then he would have to anchor himself back. We went through many iterations and versions of this scenario.”

The Third Floor also produced its previs knowing what practical builds of the set would take place. That meant the cg model of the ferry actually had two ‘modes’, one that appeared to be the full ferry and the other that had color-coded sections (green for the practical sections of the boat, and red for what would be done digitally or as a cg extension).

“It was tough at first to try to keep the ferry splitting within the small sliver of practical set we had, which was around the front 1/5th of the ship,” noted Lopez-Duprey, “but we managed to get some great angles by looking up at the ceiling or down towards the floor. Of course, this was all balanced out by wider, more expansive shots of the ferry coming apart. We kept all previs camera work as realistic and grounded as we could, only deviating for a few iconic Spider-Man moments.”

Live-action photography for the sequence made use of real sets, a hydraulic rig to simulate the splitting apart of the ferry, and water dump tanks to help sell the action as the ferry almost sinks. But there was always going to be a large visual effects component. Digital Domain was brought on board to animate a cg Spider-Man and Vulture, build a digital ferry model (and split it open), and flesh out the environments with New York backgrounds, water, and crowds.

One of their first assignments was to work out how Spider-Man would move. Watts and overall visual effects supervisor Janek Sirrs sought to focus on how Parker was only still coming to grips with his new powers. “They wanted to show he’s just a young kid and he’s new to it,” said Digital Domain animation supervisor Jan Philip Cramer, who oversaw the ferry sequence with Digital Domain visual effects supervisor Lou Pecora. “So when he’s shooting a web and starting to swing, we would animate it so he’s not easily absorbing that and not doing it elegantly.”

Although they would be crafting a cg Spider-Man for just about every shot, Digital Domain relied heavily on wire stunts and motion capture sessions Holland had undertaken. Cramer has significant respect for what the actor was capable of stunt-wise.

“This kid is unreal. I can’t believe they found a Spider-Man who is Spider-Man outside of the job. On Youtube you can see he does parkour and there are lots of crazy videos doing what he does in the film. So we wanted to take advantage of that, both on the live-action side and in mocap.”

“You need that ton of wire work on set because it grounds it back in reality,” added Cramer. “We enhance the stunts he did and we base it on everything he did. Whenever we tried to capture stunt people it didn’t really end up working. We would have to replace it with Tom Holland mocap or we would roto-mate him.”

The digital Spider-Man benefited from a new muscle system Digital Domain had been developing, and the animation approach was also carried out slightly differently than the studio was used to. Although final renders were done in V-Ray, Digital Domain used the GPU renderer Redshift to spit out fast, but high-quality, work-in-progress shots to show Marvel and get quick feedback.

As the sequence progressed, Digital Domain was called upon to add more and more action to the battle. They prevised new sections, making Spider-Man, “more acrobatic, more airborne” and Vulture “more aggressive,” according to Cramer. Ultimately, so much of what happens in the fight became fully synthetic, especially when the ferry splits open.

It’s as this point that Spider-Man unleashes his web-slingers to try and hold the boat together. Here, animators laid out the timing and placement of the webs, while the effects team at Digital Domain made them look like silky forms. “There were so many styles of webs,” said Cramer. “We were constantly looking for different ways – we had shotgun webs, machine webs, splinter webs, web bombs, split webs, multi-split webs – whatever the animator could think of, we would give it a name and it would be something we would present to Marvel to see if they liked it.”

One dramatic shot has Spider-Man connect as many webs to the two halves of the ferry as possible, with the camera following him as he weaves in and out of the ship’s super-structure. Digital Domain actually looked to Olympic gymnast footage for reference to help pull that shot off. It also heralds the arrival of Iron Man, another cg character, who welds the ferry back together.

Iron Man saves the day; in a parallel to that achievement, Cramer says the Digital Domain effects department were this sequence’s saviors, partly because of the complexities of simulating water, smoke, and fire, but also making all that happen right down to the wire.

“The amount of work we did was just over 200 shots,” said Cramer, “but to get to that we probably did 500 shots. This is what’s so great about Marvel – nothing is locked until it’s in the theater. You just massage it into place until you have a great result. It’s difficult for effects, but they did an amazing job.”