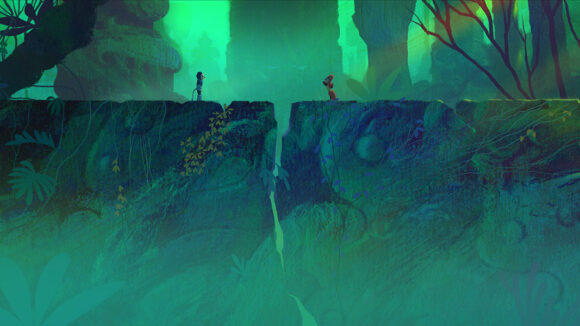 Back in 2016, Brazilian director Alê Abreu received a surprising, though highly deserved, Oscar-nomination for his debut feature Boy and the World (O Menino e o Mundo).

Released by GKIDS in North America, the film earned scores of festival awards, as well as the first-ever Annie Award for Best Independent Animated Feature. Boy and the World also remains the first and so far only film animated feature produced in Latin America nominated for an Academy Award.

Now, after several years in the making, Abreu’s follow-up is almost ready to see the light. His new feature, Perlimps (formerly titled Voyagers of the Enchanted Forest), tells a story of friendship with themes of tolerance. Like Boy and the World, which dealt with the horrors of capitalism and deforestation, Perlimps also promotes environmental awareness.

Although Perlimps was produced by a larger team than Boy and the World, the director still did all the backgrounds and much of the animation himself. The most notable change was at the screenplay stage, which went through at least nine drafts and involved the help of script doctors and exercises to develop the characters’ personalities. The production took place in a small rural town during the pandemic, factors that left an imprint on the film.

Next week a few excerpts from the film will screen during a work-in-progress session at the Annecy International Animation Film Festival, but ahead of the festival, Cartoon Brew is thrilled to exclusively premiere the first official teaser for Perlimps.

The film set to be released in 2022 with Vitrine Filmes handling distribution in Brazil. A North American distributor is yet to be announced.

Watch the exclusive teaser and read the official synopsis below:

Claé and Bruô are secret agents working for enemy kingdoms. Lost in the Enchanted Forest, amid forgotten ruins, pyramids, gas mountains and floating-rock deserts, they discover they have the same mission: to save the Perlimps from the terrible Giants that have surrounded the forest.

The brief, yet evocative clip displays richly saturated backgrounds and hand-drawn animal figures. Inside this colorful forest, a young fox is calling out for help during a storm, as a mysterious creature appears in the foreground.

“Perlimps was born mainly from the idea of beings that come from another dimension: The Kingdom of Infinity,” Abreu told Cartoon Brew via email. “These beings arrive in a playful and magical place, the enchanted forest, before entering the real world. More than a geographical space, I think it is a place without time, an allusion to childhood.”

Unlike Abreu’s earlier feature, Perlimps will have dialogue, a shift that Abreu stresses happened organically: “The dialogue here was born as naturally as it did not exist in Boy and the World. My intention is not to impose a language but to let the film emerge from the process, from a certain team, place, and time.”

All the animation in Perlimps is created digitally, but deliberately without contour lines. Abreu developed the backgrounds from randomly created ink stains that were scanned. Once digitized, he observed their shapes to find the ideal ones for each scene.

Says Abreu, “My idea was to find in those color stains the elements of the forest such as trees, logs, stones, leaves, and highlight them, but without losing the texture of the paint. This gave personality to the place where the film takes places.”

Stills below provide a better sense of the character design and the elemental aesthetic of the world. While the style appears more polished than Boy and the World, Abreu’s sensibilities come through in the color palette and experimental production processes.