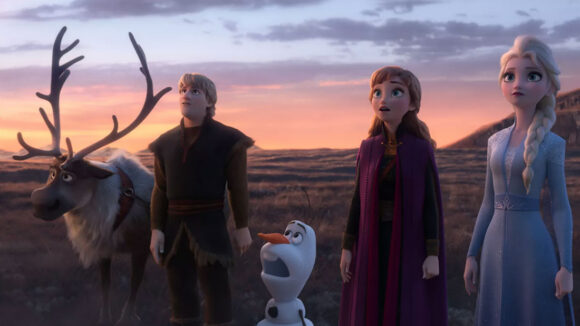 Disney’s Frozen (2013) was a fairy tale with a fairy-tale ending: estranged sisters Elsa and Anna are reunited, and everything wraps up nicely. But in the wake of the movie’s titanic success — it remains the second-highest-grossing animated film of all time — the filmmakers found that they couldn’t let the characters go.

Cue this sequel, which will hit theaters next Friday, November 22. Where the original film played as an intimate coming-of-age character study, Frozen 2 is shaping up as a darker, more action-oriented story, focused on asking how Elsa acquired her magic powers.

Ahead of the sequel’s release, we read a wide range of interviews with the team that made it, and culled their most insightful comments. Read on to learn about how the film’s narrative and visuals were conceived.

With the original film’s immense success came huge pressure to take the sequel in certain directions. The team made a concerted effort to ignore that. As co-director Jennifer Lee tells Slashfilm, “If we don’t do it true to where the characters are right now, who they are, you’ll feel the lack of authenticity.”

At the outset, Lee spent months writing journals in the characters’ voices, as a way to explore how they might develop after the first film’s happy ending. The results were revelatory, Lee explains to Collider:

There are these things that come back, that you’ve forgotten. We learned, very much for Elsa, that she didn’t know what it was like to be accepted. She’d never experienced that … And wow, that’s a place to start … And then, for Anna, having a character who was fearless and had nothing to lose for our first film, and now she’s at a place where she has everything she’s ever wanted, but in that place, has the fear of losing that.

Every detail of the characters was revisited, not just their personalities but also their physical appearances, as costume designer and visual development artist Brittney Lee describes to Blackfilm:

[W]e tried modifying and updating hairstyles from the first movie, and on Elsa, we were trying to update her braid to get more play in the wind. And it ultimately didn’t work because it was too close to the braid that we know, but not close enough. So it looked like a mistake. And we knew that, so we knew the audience would feel that. So we decided to go with her original braid, but there’s an extensive amount of testing that’s done, putting them through their paces. There’s something called a “rollercoaster test,” and that’s more for the short hair characters like Kristoff. You basically have their face in front of you, and it looks like are locked in a camera right on them as they go through a rollercoaster. And that’s meant to show you where the gaps are in their hairstyles and where we need to finesse more.

During script development, another talking point was the ways in which — and the extent to which — magical elements would feature in the story. As Lee tells Collider:

I think the thing that really spoke to me was this notion of Elsa getting to understand that her powers come from nature … Originally, there were very few magical creatures. The elements were a tug of war. And then, the breakthrough in the story, to really look at Elsa, as she learns about her magic and confronts her magic, and these antagonistic forces that keep driving her forward were magical, that felt really great.

Research took the team to Norway, Finland, and Iceland. The landscapes of Scandinavia inspired locations in the film like the Dark Sea. The general sense of adventure — particularly during a hazardous hike in Iceland — fed into the narrative, as Lee recalls to Screenrant.com:

This was this incredible land that was alive. It could kill you at any turn … We realized we’re like Anna and Elsa on the trip [to Iceland] … A lot of story in terms of Elsa’s journey came out well on that trip.

More than in the original, nature itself is personified and integrated in the storyline. Normand Lemay, the head of story, discusses the film’s enchanted forest with Comingsoon.net:

There was always this idea of this symbolism of the forest as a place of transformation … When we meet those characters now, who are three years older in their early 20s, [there’s] this idea of a pivotal change, this big moment in most people’s lives where big decisions are to be made and everything seems to be at stake … So having the forest as this setting of change felt right.

Kristen Bell, who voices Anna, singles out another aspect of the film’s characterization. As she tells The Tonight Show Starring Jimmy Fallon:

The thing I think I’m proudest of [is] the way that they represented Kristoff. In the first one, it’s like two females, it’s great. But in the second movie Kristoff has a song that is going to blow your mind … it’s about his big feelings for Anna. Little boys don’t often see representation of other boys having really big loving feelings.

The team stresses that this production called for close collaboration between departments, not least because of the unprecedented challenges posed by elemental characters like Nokk the water horse and Gale the wind spirit. Screen Rant quotes animation supervisor Svetla Radivoeva:

You usually stay in the bubble of animation or bubble of effects. But it was interesting to come out of that and start conversations with our colleagues and learn more about each other. The more you learn about them and their work, the more you can become a better animator, knowing what they’re looking for and what they’re aware of.

Steve Goldberg, vfx supervisor, elaborates on Gale’s design in an interview with Befores & Afters. He says that the team developed a new tool for Maya, which they named Swoop:

In the past, wind has been something just the [vfx] department does. But in our film, it’s a character … We ended up having our technology department create a wonderful tool that allowed for a real-time interaction with curves in space. And you could see how things were traveling on that all in real time. It was really easy and intuitive to edit. You could change the shape of it. You could change the timing of it and get feedback, all in real time.

Goldberg also talks about the approach to Nokk. The character was developed in tandem by the art and vfx departments: the former focused on designing something that looked beautiful and fit the story, while the latter ensured that the water that makes up the Nokk’s body moves in a plausible way. He outlines the vfx team’s approach to water dynamics:

We started out with the fluid [simulation] … We ended up having a cloth sim going through our tech anim department and feeding that into [vfx]. And then as the water would break apart, coming off the mane, that’s where [vfx] go ahead [and] break it apart into some larger water droplets and smaller water droplets. And then into a fine mist. Then in motion you really buy that it’s flowing water.

Erin Ramos, another vfx supervisor, notes that the water simulations on Frozen 2 are far more elaborate than in Disney’s 2016 feature Moana. As she says in the Screen Rant article:

Technological progress enables more photorealistic natural effects than ever before. But Frozen 2 doesn’t aspire to be Jon Favreau’s The Lion King: its characters are relatively cartoonish, and this imposes rules on the rest of the design, as co-director Chris Buck tells Slashfilm:

Sometimes the computer can make things so realistic that [the marriage with the characters] doesn’t quite work. So we do have to pull back, and there’s a stylization that happens with any of our elements like that, just to make sure our character still fits in that world.

Salamanders move very slow. And we wanted a little more speed with the salamander [character]. So, I looked at a ton of different reference of iguanas, lizards, basically anything. But, really, I mean, it’s such a fun, cute, cartoony character. A lot of it just kind of came from the heads of the animators. There wasn’t a ton of reference used.