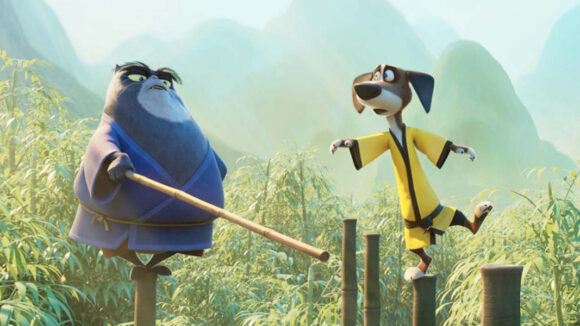 No surprise that Paws of Fury: The Legend of Hank is currently tanking at the box office. But its distributor Paramount likely isn’t too concerned. The studio picked up rights to the film for a fire-sale price of $10 million, a deep discount on a movie that carries a reported production cost of $45-50 million.

The twist-and-turny backstory of the film (originally titled Blazing Samurai) may, in fact, be more interesting than the actual film itself. It was conceived over a decade ago and announced back in 2014. Both its original distributor, Open Road Films, and animation studio, Arc Productions, went bankrupt, for reasons not related specifically to this film.

The list of companies in the final credits is impressive to say the least: Paramount Pictures, Nickelodeon Movies, Aniventure, HB Wink Animation, GFM Animation, Flying Tigers Entertainment, Mass Animation, Huayi Brothers, and Cinesite to name some of them. There’s also over a dozen producers and executive producers.

Why were so many people committed to remaking a kiddified version of Mel Brooks’s classic Blazing Saddles that was clearly a bad idea from conception? That’s a question that no logical person can answer, but there is the possibility that Paws of Fury may have seemed slightly less anachronistic if it had come out years ago as originally intended. In 2022, however, the film looks and feels like a dated relic that is out of touch stylistically and culturally with what the U.S. feature animation currently has to offer.

Critics are obviously having a field day with the movie, which was directed by Rob Minkoff, Mark Koetsier, and Chris Bailey. Around half of critics have given a thumb’s down to Paws of Fury on Rotten Tomatoes and Metacritic, and even the positive reviews are not exactly enthusiastic. Here’s a look at what they’re saying:

Paws of Fury is an efficient yet underimagined animated fable that barely musters the flavor of a cliché Western comedy. Mel Brooks, who is one of the film’s executive producers, has a voice role — he’s the Shogun, who says things like “There’s no business like Shogun business.” One wants to cut the great Mel, who’s 96, some slack, but that’s a line your grandfather probably wouldn’t have laughed at, and too much of the humor in Paws of Fury is like that. The jokes get coughed up and sit there, like furballs on the carpet.

Martin Tsai at the AV Club condemned some of the film’s content as “morally reprehensible”:

Of the eight companies and about 300 cast and crew members involved, it’s clear that not enough red flags were raised—if any—about the thoughtlessness of this production and its portrayals. Whether or not its predecessor holds up (fully or even in part) to contemporary standards of sensitivity, Blazing Saddles not only enlisted Richard Pryor as a screenwriter but at least aspired to comment on the bigotry it depicts. Paws Of Fury defangs that film’s commentary and turns its R-rated ambitions into a reminder of exactly why there need to be more people of color involved in the creative decision-making—on all projects, but especially ones like this.

Paramount’s limp, animated remake actually triggers new stereotypes in the service of trying to expose racism for a pre-teen audience. The studio seems to have reached for legitimacy by bringing the venerated Brooks along for the bumpy ride, darkening both legacies. What emerged sits uneasily at the corner of tribute, parody, theft and laziness. Paws of Fury follows Brooks’ original playbook right down to a horse-punching moment and a group farting scene but doesn’t capture his thrilling boundary-pushing vibe.

Even those who didn’t hate it, like Claire Shaffer in the New York Times, aren’t exactly in love with the film:

Despite its risqué origins, Paws of Fury manages to dish out lighthearted fun, swashbuckling action and surface-level messaging about following your dreams, though not every joke lands. The anachronistic sight gags in Blazing Saddles don’t work as well in the hyperreal world of a children’s cartoon, where the sight of a dog and a cat in kimonos attending a bottle-service nightclub circa 2009 isn’t as absurd as it would be in live action. Still, if watching those same characters sword-fight around the bowl of an enormous jade toilet sounds like fun to you or your children, this may be the movie of the summer for you.