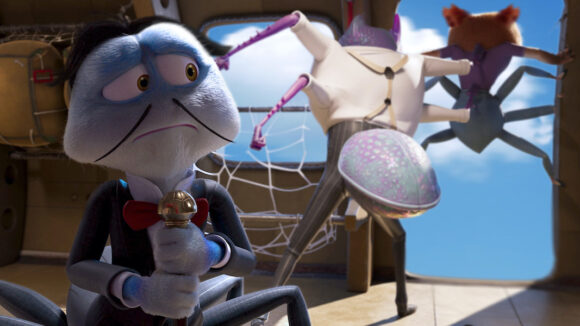 Inspector Sun and the Curse of the Black Widow, a family-oriented animated thriller from Spain, has entered production. The first images have been unveiled (see above and below).

Set in a world where humans and insects co-exist, the story unfolds on a seaplane journey from Shanghai to San Francisco in the 1930s. It centers on the spider detective Inspector Sun and his nemesis the Red Locust, paying homage to the detective stories of Agatha Christie and the fictional Charlie Chan. The script, by Rocco Pucillo, won the prestigious students-only Samuel Goldwyn Award in 2013.

The film is a co-production from The Thinklab Media and Gordon Box. It is directed by Julio Soto Gúrpide, who helmed the Goya-nominated 2017 feature Deep, and produced by Soto Gúrpide, Pucillo, Adriana Malfatti Chen, Karl Richards, Peter Rogers, and Jason Kaminsky. Completion is set for summer 2022; Kapers Animation is handling worldwide sales. Navarre-based The Thinklab Media branched out into animated features with Deep, and has previously announced another feature (beside Inspector Sun) titled Evolution. The Navarre region offers generous fiscal incentives.

3 Doubles Producciones, an animation studio based on the Spanish island of Tenerife, is working on the film. The studio’s credits include the hugely popular web series Arpo the Robot, and its staff have separately worked on films like Deep, Netflix’s Animal Crackers, and local box-office hit Tad the Lost Explorer and the Secret of King Midas.

Inspector Sun is backed by Epic Megagrants, the $100-million scheme the Fortnite developer launched to support projects that use its Unreal Engine.