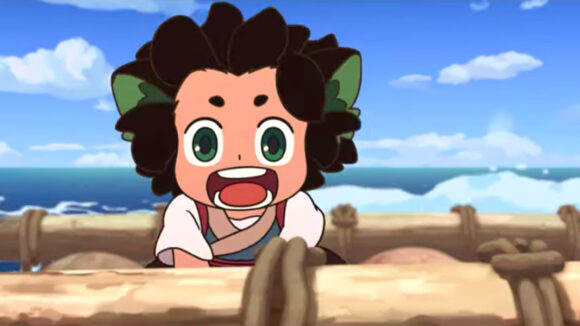 The Legend of Luoxiaohei may not have many views on YouTube, but those numbers belie its true popularity. In China, where it is made, the Ghibliesque Flash series about a young girl and her supernatural cat is something of a phenomenon. Its 27 episodes have garnered large audiences on Tudou, China’s equivalent to YouTube. And now it’s getting a feature spinoff: The Legend of Hei.

The film is due to come out in China in September. There is currently no word about an international release. The trailer has just been released — watch it below. It’s in Chinese only, but those who want to get a flavor of the series can watch it on Youtube with English fansubs. A Reddit user has provided a summary (in English) of what is known about the feature so far.

Animator MTJJ (real name Zhang Ping) created The Legend of Luoxiaohei in 2011. He initially made the episodes on his own and distributed them for free online; as the popularity of the series grew, he started earning revenue from merchandising, enabling him to build a small production team.

China is experiencing a boom in moviegoing. More theater tickets are sold there than in any other territory, and the box office is poised to overtake America’s in terms of revenue (see this article in The Hollywood Reporter for more). Last weekend, homegrown feature Nezha smashed the country’s record for an animated film opening weekend, launching with $91.5 million.

Increasingly, Hollywood animation titans are partnering with Chinese studios in a bid to capture a slice of the market. Warner Bros. worked with Beijing-based Light Chaser Animation to create White Snake, which, like Nezha, is based on a Chinese folk tale. Next month will see the worldwide release of Abominable — it was coproduced by Dreamworks and Pearl Studio, which was formerly part-owned by Dreamworks, but is now fully Chinese.