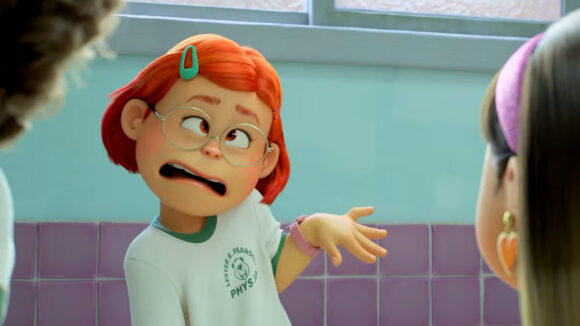 Disney-Pixar has released a full trailer for its next feature, Turning Red. The new trailer, which follows the teaser released last summer, divulges plenty of details about the story’s set-up:

The film tells the story of Mei Lee, a 13-year-old girl who turns into a giant red panda when her emotions run high. Here is the official studio synopsis:

Disney and Pixar’s Turning Red introduces Mei Lee (voice of Rosalie Chiang), a confident, dorky 13-year-old torn between staying her mother’s dutiful daughter and the chaos of adolescence. Her protective, if not slightly overbearing mother, Ming (voice of Sandra Oh), is never far from her daughter — an unfortunate reality for the teenager. And as if changes to her interests, relationships, and body weren’t enough, whenever she gets too excited (which is practically ALWAYS), she “poofs” into a giant red panda!

Turning Red marks the feature directorial debut of Domee Shi, who directed Bao, Pixar’s Oscar-winning 2018 short. This is the studio’s 25th feature, and Shi is set to become the first woman to get a sole directing credit on a Pixar feature.

Shi is directing from a script that she co-wrote with Julia Cho. Other key credits: Rona Liu is production designer, Danielle Feinberg is vfx supervisor, Aaron Hartline and Patty Kihm are animation supervisors, Mahyar Abousaeedi and Jonathan Pytko are directors of photography, and Nicholas C. Smith is editor.

Billie Eilish and her brother, Finneas, wrote three songs for the film that will be presented as songs by 4*Town, the fictional boy band that appears in the movie. Ludwig Göransson (Black Panther, The Mandalorian) is composing the film score.

Pixar’s last two features, Soul and Luca, were released straight to Disney+ during the pandemic. There have been reports that Disney is eyeing a full theatrical release for Turning Red, which comes out on March 11, 2022. The company has yet to announce its release strategy.