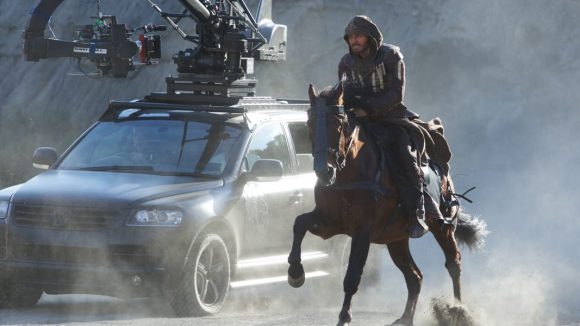 Justin Kurzel’s Assassin’s Creed is a new film based on the popular Ubisoft video game series, well known for its photorealistic computer graphics renderings of different locations in history. But for the recognizable hand-to-hand combat scenes, leaps between buildings, sword fights, and other stunts, the filmmakers wanted a very practical feel.

However, even with the practical approach, visual effects, cg, and animation still played a major role. One seemingly heavy practical stunt, a prison carriage chase involving the assassin Aguilar de Nerha (Michael Fassbender) in the desert that ends with a carriage launching over a cliff, was actually made possible with a mix between real photography, special effects, and digital augmentation by visual effects vendor Cinesite.

The chase was filmed near Almeria in southern Spain. Special effects supervisor Andy Williams oversaw the building of wagons and carriages that could be pulled by horses, as well as various horse paraphernalia and camera and stunt rigging to enable the scene to be filmed. Then, stunt co-ordinator Ben Cooke was responsible for staging the horse stunts, leaps between carriages, and some of the other action beats in the sequence, shot both in the desert and on greenscreen.

Cinesite came in to assist in heightening what were effectively the four major beats of the chase.

The assassin Maria (Ariane Labed) jumps onto the prison wagon via a 360 degree flip. The beat involved a plate of the wagon and a greenscreen plate of the actress filmed with the aid of wires. “The director didn’t want us to manipulate the image more than what had already been shot,” said Irles, “but we had to take the actress on the greenscreen, track the wagon, then put the greenscreen actress on the wagon, then animate her to walk, then do the jump, and then add cg dust to help everything blend together.”

Cinesite solved the shot by roto-mating both the wagon and actress and showing the director how the action would look in rough form, since retaining the scale was deemed important. Then digital artists would carry out the necessary integration work and add in cg elements where necessary to make the shot as convincing as possible. This beat and others in the rest of the sequence also included face replacements, removal of new buildings, environment replacements, tire track removal, weapon enhancements, and other general digital clean-up work.

The second beat within the wagon chase sees Aguilar jump from on top of a horse onto one of the prison wagons. Here, multiple plates were filmed – a stuntman on horseback riding fast, another where the stunt performer leaps off the horse, and a further take of the performer running and jumping off a trampoline with the signature ‘Assassin’s Creed’ pose.

Cinesite aided in the assembly of the scene by integrating these several different takes and also adding in cg dust, even to the level of having the dust be altered by Aguilar’s movement through the air.

Here a wagon wheel hits a large rock and flips the carriage over end. For this, again multiple plates were shot – one plate per wagon, one for each actor jumping off a static wagon, and more for the horses running by themselves without the wagons. The actual flip was also filmed with a specially rigged wagon that was equipped with a piston that threw the vehicle into the air. However, it didn’t quite tumble as planned. That’s where Cinesite again came in. They were already assembling the various plates but in this instance they also enabled the flip via a cg carriage.

Approaching the sequence this way also enabled an improved performance in terms of the horses. Having been filmed without the carriages in tow, the animals had not been required to react to anything (i.e. the flip). But now as cg horses, Cinesite could have them collapse as might actually happen, but without any safety or harm concerns.

Aguilar makes another big leap in this beat from the crumbling carriage, enabled by a mix of live-action stunt performers and a cg digital double animated by Cinesite. “In each of the shots there was just more and more destruction of the wagon,” said Irles. “When it starts tumbling, the whole thing starts coming apart. So we added lots of wood debris and a lot of dust.”

The whole point of the carriage chase has been the rescue of a young prince. Aguilar is ultimately successful, right before one of the wagons launches off a cliff. For this beat, production did stage a real stunt of pulling the wagon with a wire off a lip of land. Cinesite then had to extend the cliff to make it appear it was 300 feet deep.

That cliff asset and the surrounding environment were built in cg, and further enhanced with digital matte painting. The build was so successful that the director encouraged Cinesite to use the environment they had generated to help add any key shots to the whole chase, as Irles explains. “Justin gave us the very rough edit and said, ‘Have a crack at it.’ So we ended up designing a few of the shots that are in the film and ended up being full cg with the same environment and the digital characters, digital environment, and dust.”

The role of Cinesite here is perhaps the most interesting aspect of the sequence, and a testament to how visual effects could get involved in the final edit while still retaining the very practical nature of the shots as intended.