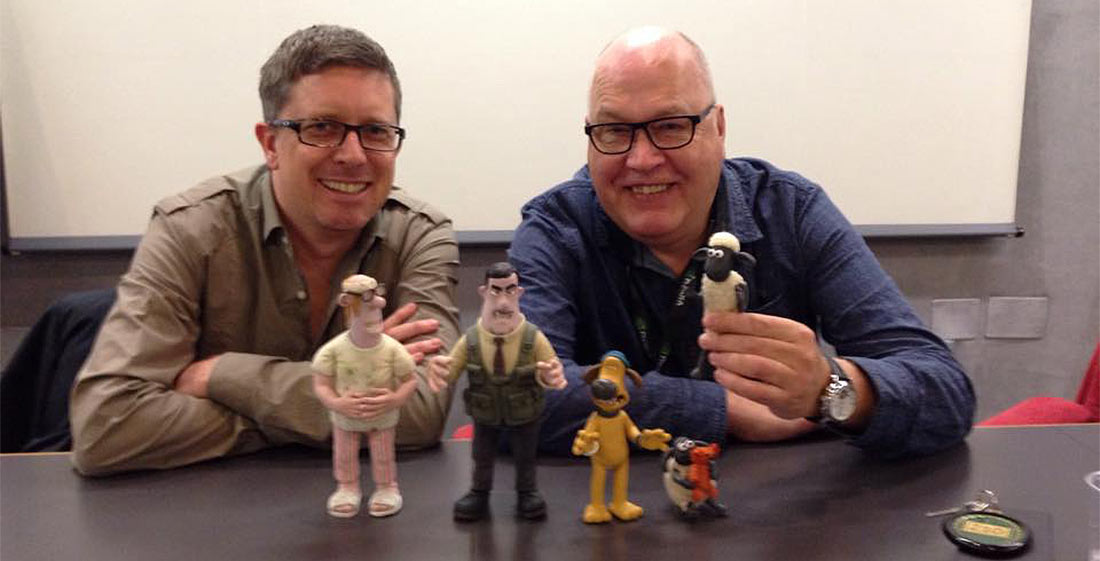 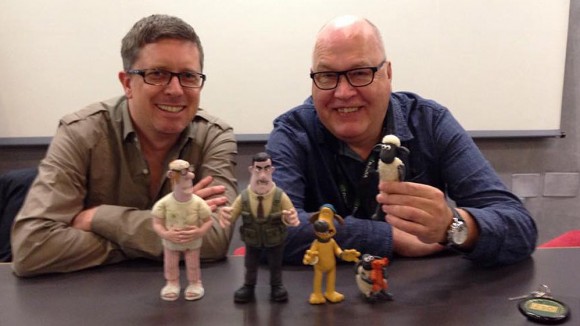 Despite comparison to the cinema of Chaplin, Aardman Animations’ Shaun the Sheep Movie bowed stateside this summer to criticism of its comparatively light box-office haul and even its old-school stop-motion technique.

But with a $100 million worldwide return on a slender $25 million budget, an Oscar campaign on the docket, and a sequel quite well underway, few are knocking Shaun the Sheep Movie now. They’re probably taking notes on how to make an all-ages masterpiece stripped of cynicism, with much less money than well-endowed CG competitors.

“I think people have an expectation, and a misunderstanding, that for an animated film to be a success, it has to make a billion dollars,” Shaun the Sheep producer Paul Kewley (top photo, left) told Cartoon Brew by phone, in a mind-meld with Richard Starzak (above right), who directed the film with Mark Burton. “And I would argue, categorically, no. We’ve proven that.”

The animation industry and fandom will continue to take note of Aardman as Shaun the Sheep Movie’s rollout to digital HD, DVD, Blu-ray, and on-demand arrives this month — right on time for the family holiday season. The same season, it bears noting, that Aardman’s half-hour holiday special, Shaun the Sheep: The Farmer’s Llamas, premieres on the BBC in the UK and Amazon Prime in the U.S., as well as the one in which Shaun the Sheep Movie’s award nominations, so far from the European Film Awards and BAFTA Children’s awards, start piling up.

I spoke with Starzak and Kewley about how and why Aardman’s low-budget, big-picture animation continues to compete in our blockbuster marketplace, and why stop-motion can be even more real than hyperreal CGI.

Cartoon Brew: Shaun the Sheep impressed hearts and minds across demographics. How did you manage it?

Richard Starzak: It must go back to Aardman’s history, really. Through a lack of professionalism, we never actually made anything to appeal to anyone other than ourselves. We tried to make each other laugh. So even when we were making The Amazing Adventures of Morph for children’s television, it didn’t work unless we were laughing ourselves.

There seems to be a false line between humor that works for adults and children. Today, animation has a tendency to veer cynical in the name of accessibility, but you’ve managed to strip out the cynicism.

Richard Starzak: That’s exactly what I love to do. I hate films that have an ounce or streak of cynicism in them. I think kids can smell it a mile off, as well. We like to stick to the integrity of making the film as funny as possible. It can be a bit subjective, but our brain trust, which is all of the same age, has taken us a long way making films that lack cynicism.

Paul Kewley: When I joined up about six years ago, I had always loved Aardman’s films from afar, and what still strikes me is that they take them incredibly seriously. It’s important to Aardman to make films that matter, that have depth, that are warm, funny, and engaging. Getting comedy right is an art form, and it takes work.

Do you think there’s too much reliance upon cynicism in animation, internationally speaking?

Paul Kewley: I think there is in filmmaking, to be honest. One of the problems comedies face in general is they tend to be quite cynical, which makes it difficult for them to travel, because they’re not as universal in their storytelling.

There was criticism that Shaun the Sheep Movie didn’t perform at the box office. But since it made $100 million worldwide on a $25 million budget, the return on investment puts it into competition.

Paul Kewley: Absolutely. When we started Shaun the Sheep Movie, we really analyzed how to make it work as a creative and commercial success — and the budget was such that now we’re already going to sequel. It’s been a great project for our partners, because it is great business. I think people have an expectation, and a misunderstanding, that for an animated film to be a success, it has to make a billion dollars. And I would argue, categorically, no. We’ve proven that.

Richard Starzak: I normally try to steer clear of that stuff, but yeah, I was very pleased, because I love the freedom of working with a smaller budget. We had the perfect partners, who said, “Well, you’re the filmmaker, we trust you.” They came in with comments, but I think we policed ourselves well. During the process of making Shaun the Sheep Movie, we never felt pressure to alter what we were doing. When you’re working for the big studios, you tend to hear lots of voices, telling you what works and what doesn’t. But we didn’t have that, and as a result I think we made a very personal film. Our success comes from integrity.

What can you tell me about the sequel so far?

Paul Kewley: [Laughs] I don’t know. Have you got any ideas, Scott?

Richard Starzak: [Laughs] Well, send them through. We pay well, if we use them. But we are very excited, because we have landed on an idea, after running in circles around it for months. But we haven’t told the financiers or anyone else yet, so if you don’t mind, we’ll keep that under our hats for now.

Paul Kewley: Yeah, at the moment, all we’ve done is announce that we’re doing the sequel. Studiocanal is very keen to get the movie as quickly as they can, so we’re working away.

Speaking of, I liked that Shaun the Sheep Movie didn’t lean on episodes of the TV show. It literally took off in a new direction.

Richard Starzak: Right, apart from the sheep dressing up as humans, which I always wanted to expand on anyway. I always loved that idea.

Paul Kewley: We would often find our ideas had already been done in the series, but Richard has a pretty good memory of the 140 episodes we had at that point. We were careful not to repeat ourselves, and keen to do something original.

When Shaun the Sheep Movie came out, I also read arguments that stop-motion is losing appeal in the CGI era. But from its reception, to Charlie Kaufman’s Anomalisa and Wes Anderson’s next stop-motion film, that criticism seems lacking.

Richard Starzak: I find it hard to believe, because stop-frame is what I’ve grown up with. Over the last 20 years, I’ve been aware of arguments that it’s in trouble because of computers, but that’s just not the case. If you watch and really engage with stop-frame film, I think you appreciate the fact that these things really exist. They’re real puppets, on a real surface. There’s something about that which makes it come more alive. I love CGI as well, but I’m still a big fan of stop-frame, and I’m probably too old to change now.

Paul Kewley: I think stop-frame has an undefinable quality. Characters seems to come out of the screen in a way that is quite difficult to achieve in CG. I don’t think you can say it’s a dead technique at all; it’s been absolutely proven that is not the case. A lot of this comes from pressure to perform at the level of Hollywood CG movies, and I’m sure that, one day, a stop-motion film will do that, when the right filmmaker finds the right subject and execution.

Do you think there is too much of a reliance upon CG in animation these days?

Paul Kewley: Personally, no. I think you use whatever medium is appropriate to what you are making. Stop-frame has limitations, but those limitations are what make its films work.

Richard Starzak: That’s a hard one. I’m very fond of CGI films; I loved the Toy Story movies, and most of what Pixar makes. I just think it’ll get better. Sometimes in certain films — and I won’t name any names — the characters don’t seem to interact with their surroundings, because all of those elements are done separately. You can feel it when you watch the films; the characters could be in any environment, and unaware of the environment that they are in.

Whereas in Shaun, because the characters are in a space, and they have to interact with that space, it feels more natural. The best CGI films do that well, but I think that even in their most tense, dramatic scenes, viewers understand it’s not real so they’re not affected in the same way.

Any thoughts on an Oscar for Shaun the Sheep Movie?

Paul Kewley: We think it’s fantastic that we’re even being considered, that we’re being talked about in the same frame as the other films.

Richard Starzak: I generally never think about awards when I’m making a film. But I’m thrilled that it’s under consideredation, and that Lionsgate asked us to talk about it. If it goes further, fantastic. I hear the goodie bags are really good.

(Photo of Paul Kewley and Richard Starzak via Comic-soon.com)