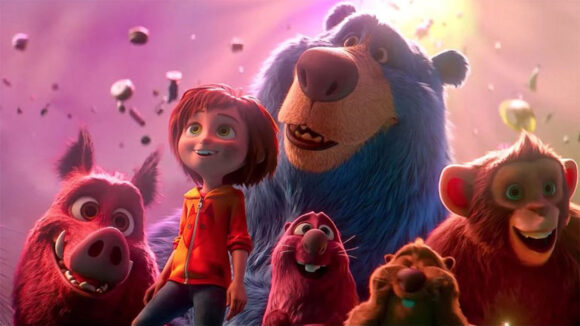 Paramount Animation and Nickelodeon Movies’ new animated feature, Wonder Park, is getting some of the worst reviews of the year.

With 50 review to date, the movie holds an abysmal 28% score on the review aggregation platform Rotten Tomatoes, which is the lowest for an animated film since last year’s Sherlock Gnomes (27%), which was also from Paramount Animation.

Centered on a young girl whose imaginary amusement park comes to life to help her overcome grief, Wonder Park has gained notoriety beyond negative reception because it was release without a credited director. As far as we can remember, this is the first time that a major studio cg feature has opened without anyone being listed as the official helmer.

Back in January 2018, when the project was still titled Amusement Park, Paramount fired its director Dylan Brown following an investigation over complaints of “inappropriate and unwanted conduct.” According to reports at the time, the former Pixar animator’s behavior included touching and caressing female co-workers.

Sources tell Cartoon Brew that after Brown was fired, a director’s credit was offered to multiple other key creative personnel on the film, but no one wanted to put their name on the film for fear that it would be detrimental to their career. Reviews of the film give some clue as to why no one wanted their name on the film, noting the tonal imbalance created between the glossy adventure sequences and the darker issues addressed in the story. Opinions on the aesthetics of the animation are divided, but the stylistic choices don’t particularly stand out.

In his review for Indiewire, David Ehrlich noted:

The problem could be that Wonder Park, like so many of the less refined 3D animated films that Hollywood churns out, is just upsetting to look at for more than a few seconds at a time. The plastic designs feel like the products of a soulless, Skynet-like artificial intelligence that’s hellbent on lowering kids’ standards so that they’re more tolerant of mediocrity and artlessness when they come of ticket-buying age. June’s massive eyes make it easy to read her emotions, but impossible to believe them.

Much of the movie feels like filler. Shots are often overlong; scenes drag or are entirely unnecessary. If June’s adventure in Wonderland is the engine that drives the story, why does it take nearly 40 minutes to get there? Pixar can tell us about childhood sweethearts who grow up to marry and have a long, happy life together — all in the first 10 minutes of Up. Why must we spend what feels like hours watching one scene after another demonstrating that June likes to build stuff?

Frank Scheck in The Hollywood Reporter:

Like so many animated movies these days, it buries its ideas in a visual and aural cacophony of frenzied action sequences designed to engage the shortest of attention spans. It also features a gallery of would-be adorable animal characters so obviously designed to fly off toy store shelves that you expect the merchandise to be on sale in the theater lobby.

On the other hand, despite ultimately giving the film a negative review, Variety’s Owen Gleiberman praised Wonder Park’s animation:

The animation in Wonder Park is never less than textured, sculptured, world-class. There is barely such a thing anymore as a mainstream animated feature that looks less than miraculous in its witty sensuality and tactile precision, and Wonder Park, in its blockbuster storybook way, has images that ravish the eyes.

The animation Gleiberman describes as world-class was created by Madrid-based Ilion Animation Studios. In 2017, the Spanish company signed a multi-year partnership with Skydance Animation, the now-embattled studio where John Lasseter is head of animation. One of the projects in which Ilion Animation Studio is collaborating with Skydance is Luck, a feature that was recently in the news when actress Emma Thompson exited the feature in protest over Lasseter’s hiring.

Despite Wonder Park’s uneven quality, Paramount feels that the film could do well with young audiences, and has promoted the film heavily to children, outspending even Captain Marvel on tv ads in the last three weeks. The studio has spent an estimated $27.4 million on tv advertising, with a lot of the spend used for ads during Nickelodeon shows like Spongebob Squarepants, The Loud House, and Paw Patrol. The studio also promoted the film extensively on the legacy networks — CBS, ABC, and NBC.

Paramount has a reason to want the film to succeed; according to a report in Deadline, the film cost $100 million to make, an outrageous figure for an animated feature produced in Spain. The exorbitant cost might be attributed to all the years the film spent spinning its wheels in development at Paramount.

Deadline also reports that based on early box office returns from Friday, the film is overperforming and could potentially see a $20+ million launch, far above the initial projections of $10-14 million, but a nonetheless weak start for such an expensive title.