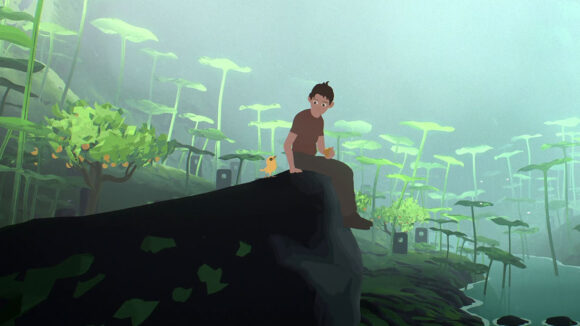 You might hear about a cg animated short being tackled by a single person, alone. But a whole animated feature? It sounds incredible, yet that’s what Gints Zilbalodis did for his new film, Away.

The Latvian animator produced the 75 minute-long film—which is screening in competition this week at Animafest Zagreb and next week at Annecy—over three-and-a-half years without a complete script or storyboards, and instead discovered the story largely from editing together rough animation done in Maya.

Cartoon Brew worked through the process with Zilbalodis to find out how he approached the film, the tools and techniques used, and how he was able to stick at it for so long.

Zilbalodis, 25, has already made several shorts, including Rush when he was 15 years old, Aqua in 2012, and Priorities in 2014. Funding from the Latvian government arrived for another short, Followers, in 2015. At this point, the animator looked to make a feature and asked the state funded Culture Capital Foundation of Latvia for a grant.

“When I began,” said Zilbalodis, “I knew that if I asked them to fund the whole feature they probably wouldn’t trust me, understandably, because I didn’t really have a lot of experience. So I decided to split the project into four different chapters, which were funded and made separately, but I always had intended to make it as a whole feature.”

Zilbalodis says that the funding for the four parts was small – “probably smaller than what you might get for a short film,” he said – and that effectively drove him to make the pieces all by himself.

The early stages of working on the film involved only a rough outline and a few concept sketches. While Zilbalodis had a story in mind for Away (about a boy who befriends a small bird and tries to find his way back home), it was deliberately loose.

“I try not to write the story very detailed at first,” said Zilbalodis. “I want to figure out what are the things that I can actually do. In animation, you can pretty much do everything nowadays, but some things are easier and some are harder. I wanted to figure out the things that were not too hard to do in the software so I didn’t drive myself crazy.”

Finding a story with the 3d software

Away was made entirely in Autodesk’s Maya, even being rendered in ‘real-time’ via Maya’s Viewport as a playblast animation. Zilbalodis acknowledges this approach, which still let him model everything in 3d even though the film has a non-photorealistic aesthetic, had its limitations. “But I tried to use those limitations to my advantage. If I had had to make this film on a CPU-based renderer, it wouldn’t have been possible. The actual quality of the story would be worse because I just wouldn’t have spent the time tweaking the story as much as I did.”

Which brings up a major point about the production of Away, and Zilbalodis’ slightly unusual process. Instead of refining the story first via script, storyboards, or animatics, the animator moved quickly into building characters and the world of the film inside Maya. He then used the camera in 3d space to ‘find’ possible story points.

“I would open up Maya and load the characters and I’d be looking around in there,” explained Zilbalodis. “The whole first chapter is almost entirely in one Maya file. I could just take the camera and scout the location and I would look for interesting angles and I would do some very rough animation and see how I could edit those together. While I was doing this, I was also figuring out what the characters would do exactly. There was a lot of experimentation.”

Following that process also meant Zilbalodis decided to feature many long takes in the film with the camera floating freely as some kind of action happens on screen. It was all part of keeping the visuals very simple, says Zilbalodis.

“I mean, the characters don’t have any shadows in this film. Right now I’m doing the next film where I’m trying to experiment with a bit more detailed style for the characters, but in Away I wanted to keep it very simple because I was learning the process while I was doing this film.”

The one-man effort that began in August 2015 continued with editing (Zilbalodis did that with Adobe Premiere Pro) and sound and music (composed in Apple Logic Pro X). It was a process that only came to completion in January 2019, but one the animator worked on full-time. “I was working pretty much seven days a week, maybe eight to 10 hours a day. Usually I started when I woke up and once I got tired I would stop. I didn’t try to finish what I had began that morning. Because the process is so long, you have to brace yourself and prepare for the long production.”

Technically, the toughest challenge was a scene involving multiple cats. That was because of the time it took to animate several similar characters. Originally Zilbalodis aimed to make each cat slightly different and provide them with different personalities. “But that was really hard to do,” he said. “So I made them all the same and I would also copy the animation from one cat to the other. Usually that would look very cheap and not realistic, but in this case it actually helped – the cats are acting with a bit of a hive mind, so it fit the story.”

The filmmaker’s next project, Flow, is an animated feature based on his earlier Aqua short. This time he’s using Blender and rendering in real-time with Eevee. Zilbalodis is also more open to working collaboratively in the future.

“Hopefully if this film turns out to be successful, maybe I’ll have some more choices and maybe it will be easier to attract other people for the next film. However, I am a bit scared about losing control and I’m trying to figure out how I would translate my working methods to a team. I didn’t use storyboards or other tools that are very much what you have to use when you’re doing a film with a team. I would have to change my ways of making a film, so it’s a bit scary for me to reinvent myself right now.”