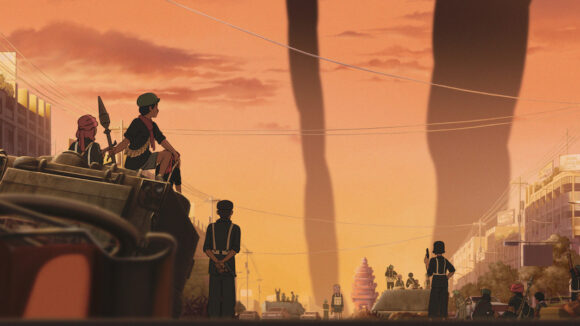 In November, the Netherlands will get a new animation festival — or, rather, a reboot of two old ones. The first edition of Kaboom Animation Festival will take place across Utrecht and Amsterdam on November 9–17. As the cities suggest, Kaboom is the merger between KLIK Amsterdam Animation Festival and the Holland Animation Film Festival (HAFF), which used to be held in Utrecht.

Although presented under one banner, the festival’s two halves are shaping up very differently. The Utrecht event (November 9–13) will focus on kids’ animation. A screening of the Korean feature The Satellite Girl and Milk Cow has been confirmed, alongside various activities: “Visitors young and old can come eye to eye with their favourite animated characters… build an animated world in three days or go on an expedition with the whole family to record the sounds of Utrecht. Little as well as full-grown explorers can delve into our Exploration Station and workshops for different age groups.”

In contrast, the Amsterdam segment (November 13–17) will feature a more adult-oriented lineup of shorts and features, including Gints Zilbalodis’s Away and Denis Do’s Funan. Special programs will include a retrospective of Korean animation and a presentation of the upcoming Amazon series Undone, which is co-created by the team behind BoJack Horseman and directed by the veteran Dutch animator Hisko Hulsing.

The animation community has been awaiting this news for some time. Last year, HAFF was cancelled after an acrimonious dispute between the festival’s board and its longstanding artistic director, Gerben Schermer. As Screen Daily reported at the time, Schermer resigned in the wake of the board’s call for more commercial programming. HAFF’s merger with KLIK was subsequently announced (under the name KLIKxHAFF), but details remained under wraps until now.

Elements of these two festivals live on in Kaboom. The host cities remain the same, although the event will now play out over one week, instead of being split across spring and fall. KLIK had a reputation for quirky, eclectic programming, and it looks as though that ethos won’t change. In a Facebook post, one of KLIK’s curators (and Cartoon Brew contributor) Tünde Vollenbroek wrote, “The name is new, but rest assured it’ll be the same old fun in Amsterdam!”

Meanwhile, Utrecht has effectively traded an edgy, auteur-driven festival for a family one. This is in line with the board’s pursuit of a broader audience, and marks a decisive break with Schermer’s approach. Over three decades at HAFF’s helm, he consistently championed independent and experimental work, and ended up influencing many younger festival programmers. This AWN article collated tributes from members of the industry shortly after Schermer’s departure last year.

When the merger was announced last October, the festivals’ leaders issued the following statement: “After the departure of its former director [Schermer], HAFF invited KLIK to explore the possibility of creating a joint festival. Over the course of these talks, common ground was found in a forward-looking attitude and the recognition of how complementary both festivals are to one another. Both parties are enthusiastic about the opportunities a joint venture can create for further development of the Dutch animation sector within our cultural landscape.”

Kaboom will announce more details about its first edition soon.