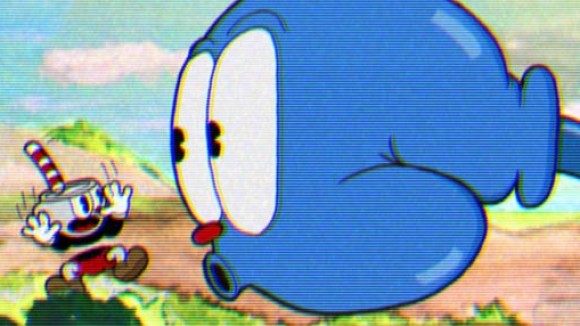 Not only can we look forward to Cloudface, we can also anticipate Cuphead, a game that will be “hand drawn and inked in the 1930s style.”

The developer Studio MDHR has the classic animation look pegged, from lush watercolor backgrounds to authentic pie-cut eyed, rubbery characters who look straight out of a Fleischer/Iwerks short. This is how they describe the game:

Cuphead is a classic run and gun that centers around 1-on-1 fights (2-on-1 in two player mode). With Cuphead, we aim to evolve the genre by adding new features such as: super arts, infinite lives, a playable world map and hidden secrets. In addition to that, we will have refined controls, additional boss patterns on harder modes and balanced weapons to equip (that you don’t lose!). We plan to release 10-15 bosses per episode and end up with over 30 bosses. If all goes as planned, we will defeat the current “Guinness World Record for Most Boss Battles in a Run and Gun Game”[25 total]. Studio MDHR is developing the game for PCs. After the PC version is released, they plan to port to Mac/Linux platforms and “hopefully consoles (PS4, XBoxOne).”