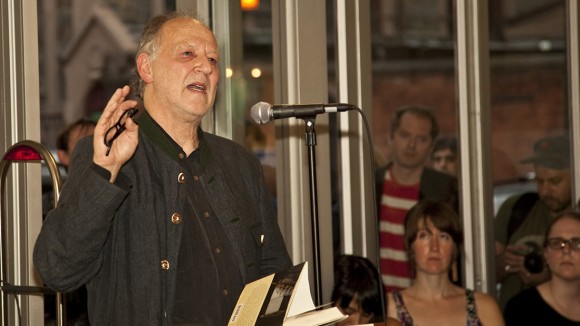 Legendary director and provocateur Werner Herzog has always been living in virtual reality — except when he’s travelled on foot.

That’s because the influential auteur, who has directed well over 50 fiction and non-fiction films and shorts that have redefined cinema as we know it — “Even his failures are spectacular,” Roger Ebert once said — believes humans evolved from experiencing firsthand what he nevertheless considers to be our collectively ambiguous reality, which instead can feel like virtual reality. Not that his favored cinema, or even VR’s sometimes “claustrophobic” technology, aren’t throwing much of those experiential assumptions into critical relief.

“Understanding of space is probably one of the things that cinema can really do quite well,” Herzog explained in a back-and-forth with neuroscientist Patrick House, recently published in The New Yorker. But VR is “a form of space that we haven’t experienced yet. It is a form of space that occurs in our nightmares.”

Herzog admitted that he got tired of what currently passes for VR “fairly quickly,” he said. “What was more convincing was animated films,” he added. “Digitally created landscapes and events made a better impression on me.”

Nevertheless, Herzog believes that VR is a singular experience with the potential to become more than just “an extension of cinema or 3-D cinema or video games. It is something new, different, and not experienced yet.”

That is because VR upsets the normal structures and relations of cinema, in that its technological disruption supersedes the artistic process. According to Herzog, human culture has traditionally dreamt up its narratives first, then sought out the means of production to materialize them.

“You have the content first, and then the technology follows suit,” he told House. “In this case, we do have a technology, but we don’t have any clear idea how to fill it with content.”

As such, we’re left seeking experiences that can best be expressed in virtual reality, which was the case with Herzog’s 2010 documentary, Cave of Forgotten Dreams, analyzing some of Earth’s earliest paintings on the walls of France’s Chauvet-Pont-d’Arc Cave. Once skeptical of 3-D, Herzog felt that “3-D was necessary for that film because paintings, thirty-two thousand years back in time, were not on flat walls in the cave but on wildly undulating ones.”

That said, Herzog is not exactly in love with technological disruption. His next documentary, Lo and Behold, Reveries of the Connected World, premiering this weekend at the Sundance Film Festival, seems sanguine about the Internet’s potential to bring humanity together in technocratic utopia. He’s particularly critical of video games.

“I don’t see anyone who is addicted to films, but I do see young people addicted to video games,” Herzog said. “It is so bad that now rehab centers have started.”

“Cinema is over when the film is over, the credits are over, and the doors open and you are pushed out into the street and it’s still day out there,” he added, noting earlier in the conversation that cinema is also “the most intense way to express our inner condition.”

So far, virtual reality is struggling to replicate that intensity of expression, said Herzog. Oculus Story Studio technical director Max Planck told Cartoon Brew as much last year at a screening of their short, Henry. “We’re still in a novelty phase, somewhat stuck with the trappings of film,” Planck admitted.

“Short forms that I have seen look fairly convincing and fairly good, but I do not see a real, big form of expressing the state of our existence,” Herzog told House. Quoting the Prussian war theoretician Carl Von Clausewitz’s famous aphorism — “Sometimes war dreams of itself” — Herzog reframed Clausewitz’s rhetorical question for VR: “Does virtual reality dream of itself? Do we dream or express and articulate our dreams in virtual reality?”

Herzog regards his query as indicative of the inherently ambiguous nature of human experience, which leads to the “most fascinating” but “very disturbing” possibility that “we do live in a virtual reality all the time anyway, in some sort of virtual ambiguity,” he said.

Although Herzog concluded that the answers to these philosophical questions remain to be found, he nevertheless emphatically argued that “the world reveals itself to those who travel on foot” — not through a VR experience of someone traveling by the same means.

“We were made as humans to travel on foot, and sometimes very large distances, or as nomadic people,” Herzog said. “Strangely enough, the only time I got the feeling I was not caught in a virtual reality is when I travelled on foot.”