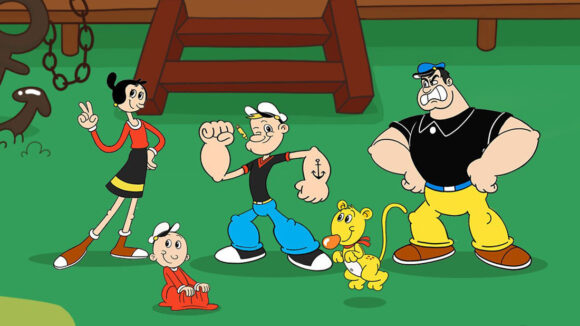 Unfortunately there’s not much positive to say about this miserable misguided attempt at resurrecting the character, though one can’t help but be impressed by how wildly they’ve failed at capturing the spirit of the character. It’s almost as if King Features sat down and wrote a list of everything that makes Popeye fun and entertaining to watch, and then systematically eliminated those elements one by one from this new production.

Popeye is now younger, though King Features doesn’t seem to be exactly clear on how many years they’ve shaved off, which is not a good sign considering that they’ve commissioned Wildbrain to make 25 two-minute shorts. “He’s younger, but you can’t tell how old he is,” C. J. Kettler, president of King Features, told the New York Times. “He’s not an old guy, he’s not a young guy, he’s somewhere in between.”

Instead of sporting a pipe in his mouth, Popeye now carries a whistle. (Perhaps he’ll referee a football game in a future episode.) And spinach gives him superpowers, like ear-flying, which is probably intended as a substitute for the physical comedy of the classic cartoons from the 1930s and ’40s.

Popeye’s sometimes-wife, sometimes-girlfriend Olive Oyl no longer plays the role of damsel in distress; she’s an independent girl — or woman — again, it’s not clear how old she is. And Popeye’s adversary, brutish Bluto, is newly clean-shaven and no longer pushes boundaries with Olive Oyl. His new goal is stealing Popeye’s spinach, which he does by quietly tip-toeing around and avoiding any physical altercations. (Because what child doesn’t love seeing a bulky man try to steal another man’s vegetables instead of cartoony roughhousing?)

And yet another change: Popeye, whose iconic voice was one of his most distinguishable personality traits, no longer speaks. This is apparently a concession to the previously unknown but quite influential contingent of Bangladeshi Popeye fans. King wants the new shorts to be “as funny here as they will be in Bangladesh,” according to Neeraj Khemlani, president of Hearst Entertainment and Syndication.

The most disheartening part of this feeble corporate cartoon concoction is reading in the New York Times that King Features is also evolving the Popeye newspaper strip by inviting different artists to draw an online version in their own style each week and skewing the content to an older audience. That kind of playful experimentation would have been fun to see with these new animated shorts as well, but as usual, animation gets the short end of the stick.