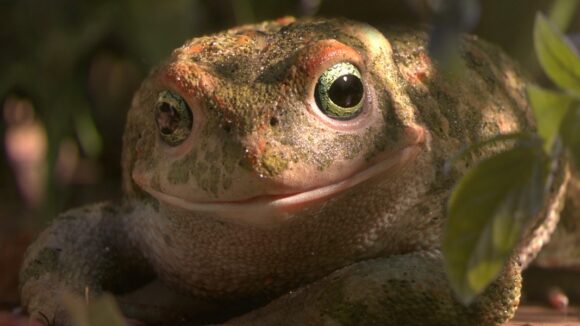 The first thing viewers tend to notice about the quirky amphibian-filled animated short Garden Party, a graduation film by a group of students from French animation school MOPA, is how photoreal it is.

That’s a product of the filmmakers – Florian Babikian, Vincent Rayoux, Victor Caire, Théophile Dufrense, Gabriel Grapperon, and Lucas Navarro – taking advantage of techniques such as photogrammetry and the latest cg software tools to bring an abandoned mansion and its frog inhabitants to life.

Now the film is shortlisted in the final ten in the animated shorts category for the 90th Academy Awards, and one of its directors, Victor Caire, ran down for Cartoon Brew how the photorealistic feel was achieved.

The idea to showcase realistic animals was the idea from the beginning, noted Caire. “Animals are great characters to tell a story. They think less than a human which makes them more innocent. It’s easy for the viewer to connect with, to understand their emotion and reaction.”

The fables of La Fontaine, which reveal human behavior through the actions of animals, proved further inspiration. Garden Party, which has a more sinister human plot happening parallel to its animal tale, allowed the two worlds of animals and humans to come together (and in a humorous way).

The story has perhaps even more impact owing to the high level of photorealism in the film. Getting there began with reference.

“We set up two vivariums in our house and we spent time observing real frogs and toads,” said Caire. “We learned a lot about their animation and anatomy. It was always fun to give them worms and crickets and watch them hunt. Lots of crickets escaped and as they sang all night we felt like living inside a swamp.”

For the backgrounds and props, the team also employed a make-shift photogrammetry set-up of multiple DSLR cameras, and then used RealityCapture software to produce 3d models and textures. That provided a base level of real-world textures to match to. Maya was the principal software used for layout and animation, with ZBrush for modeling, Mari and Substance for texturing, and Houdini for effects simulations such as water. Rendering was handled in Arnold and compositing done in Nuke.

“We had some shots with render times up to five hours,” said Caire, “so we organized the production to have the first final shot ready to render early in the year. This way we were able to divide the render time into months. We were racing with the renderfarm to be able to have a new shot ready as soon as one finished.”

The filmmakers, who have since created a collective called Illogic to produce more cg pieces, worked on every single aspect of the Garden Party short themselves, including sound design. As a graduation film, the team spent 10 months on production, totalling around 20,000 hours of work between them.

“We quickly decided,” said Caire, “beyond the individual skills of each teammate, to have everyone involved in all the steps of the production. We didn’t hesitate to pass the hand from one guy to another, to keep a fresh eye on everything. It helped to keep the whole team aware and concerned.”

Asked if a similar kind of film perhaps might also have been achieved with more cartoony or stylized animation, or whether they considered that approach, Caire said a ‘documentary’ style was what fit the story they wanted to tell.

“Photoreal cg has this captivating power on the audience, and allowed us, with absence of dialogue, to get focus on the images and their details, which was very important with the complexity of our story,” he said.

“But more than that, we needed the realistic look of documentaries to tell the story in an objective way. We tried to just show the adventure of these frogs, and let the viewer make his own mind about what’s going on. It also helped to have a more serious tone that we wanted, and play with the clichés from similar films. A cartoony version of this short would have been fun to do though, but we would have to go for something lighter and more crazy.”