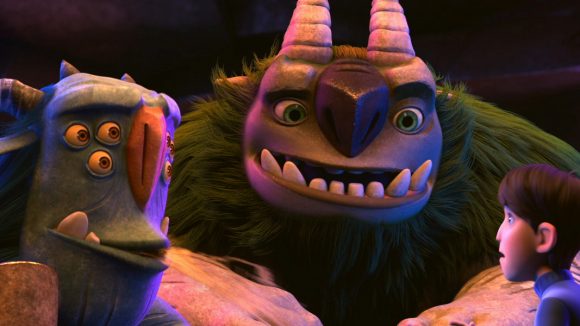 The Netflix cg series Trollhunters depicts a world in which trolls live beneath humans, and who seek out a human defender. Conceived by Guillermo del Toro and produced by Dreamworks Animation, the series was warmly received when released last month. Trollshunters is currently tracking to become Netflix’s most-watched kids original ever, and has four nominations going into the 44th Annie Awards.

Cartoon Brew caught up with showrunner Rodrigo Blaas, a Pixar and Blue Sky Studios alumni, to discuss the series, including how it moved from a film project to Netflix, what approaches to design and animation were taken, and what influence del Toro had on the production.

If you haven’t seen the show yet, first check out the trailer, below.

Cartoon Brew: What was your role as a showrunner on Trollhunters?

Rodrigo Blaas: It was a little special for this show. With Trollhunters we started out as a feature, and we developed that for three or four years. I was the co-director with Guillermo del Toro. So we had done a lot of pre-production already in that development process. Once it became a tv show, we naturally blended into the process of TV. In this case as showrunner I was in charge of taking the vision that we had for the feature and translating it to each episode and the series.

A lot of that role is voice recordings, so, directing the performance of the actors, talking with the writers to get the flow of the series. We made this with a very strong goal of making it for binge watching, so it would be something you could watch one episode straight after another and would want to know what’s happening next. I was in charge of keeping that vision from episode to episode. I was also directing some of the episodes.

What was that transition like from film to series? It feels like a lot of the filmic language and cinematic aspects were retained.

Rodrigo Blaas: A lot of the people who worked on the show have backgrounds in film. So we were always thinking about cinematic cameras and lighting. It comes from that and also this world that we had, where we wanted to push the boundaries of what a tv show in cg looks like. But because the time and the schedule were very limiting, we had to find shortcuts to make the show but keep that cinematic feel.

We made a lot of decisions early about things like having a lens package and a camera language through the show episode to episode. Lighting was extremely important and we considered our color keys early on in the process, before the animators even came on. I call it ‘bending the process of tv’ just to be able to fit some of these ideas to make a cinematic show.

How close is the series to the original material – the book written by Guillermo and Daniel Kraus?

Rodrigo Blaas: We veered off a bit from the book. We were a little closer on the movie version. We didn’t actually get the book until a while into the process, so the first thing I talked to Guillermo about was a treatment he had. We changed things a little to make it more personal, to have the character Barbara taking care of James, and that was how I grew up and how my mother raised me when I was in my teens. We wanted to have James looking for a father figure which he doesn’t have at home. That’s why he goes to Blinky and Strickler and in the end finds it in himself.

What was your approach to character and environment design for the show and who was involved in this process?

Rodrigo Blaas: Because we had a fairly lengthy prep time, we had a lot of time to explore. For character design, we worked with Headless Productions in Barcelona. I always loved their simplicity and shape language. In cg animation, you can get very detailed and have ‘busy’ characters very easily, so it was really important to have a shape language that was simple and very silhouette based. That also was important for environments.

What kind of production pipe did you follow in making each episode from writing, boarding, voice recording, and animation?

Rodrigo Blaas: I wanted to set up this process where we were ‘prep heavy.’ A lot of the designs were very detailed and specific. A lot of the animatics had to already have some camera information in them. So we brought in backgrounds that were already cg so we could understand what the camera would do once we went into production, and that was communicated to the layout team. The color key process was really important to make sure everyone, even before lighting, had a very clear idea what the episode would look like and what stage in the series it would be, since I was thinking of a light structure for the whole series.

What kind of challenges in animation did you have on this show?

Rodrigo Blaas: Animation was one of the most challenging things. We chose one of the hardest things to do in animation, and that is to animate humans, especially in cg. On the tight schedule we had, we had to find ways for the design to be very simple – have silhouettes to pose and hold poses, whereas on a feature you’d have to put in some residual movement just to keep it alive. We wanted to find that bridge that makes the physicality of a character believable but not do full-on feature animation for.

One of the great things about tv animation, I think, is trying to push the tone of what animation usually gives you. Knowing we were working with Guillermo, we knew we could push the tone to be a bit more scary. I mean scary in the way kids can handle it. We were looking at doing a more Amblin-type of tone where these kids are discovering a fantastic world and we see that through the kids’ eyes.

When you’re doing that you’re going more into an unknown territory and you don’t know what’s behind a door, which can be fantastic but also scary. So it was really important to balance that between good scares but also fun. And that means for the troll animation, say for Argh, we would have that thing where it looks frightening at first but then you could give him a hug – he’s like a big pet.

How did the animation approach here maybe differ from a feature film?

Rodrigo Blaas: Well, in tv you typically work with different studios around the world. So in that way, here at Dreamworks we did mostly a lot of prep’ing with animatics and design and asset builds. As the production team, we had to make sure all that was communicated to the other studios we worked with. There were studios we worked with in five countries.

With Guillermo del Toro on board, did anything surprise you about what he brought to the show?

Rodrigo Blaas: Guillermo del Toro really brought three things to the show. One was the opportunity to bring this to life. That was quite a gift that anyone working on these shows can ask for. Connected to that is this deep wealth of reference that he brings to the table – we explored so many books, troll lore, Norse mythology – and really made sure we were digging into the world we created to give it weight and gravitas and history. Another thing he brings is protection. The way he’s done his movies and projects is make them very personal. And then the third thing is, he curses a lot. That is actually very refreshing because he’s very specific when giving notes in reviews. Everyone takes it in a fun way but it gives us specific feedback.