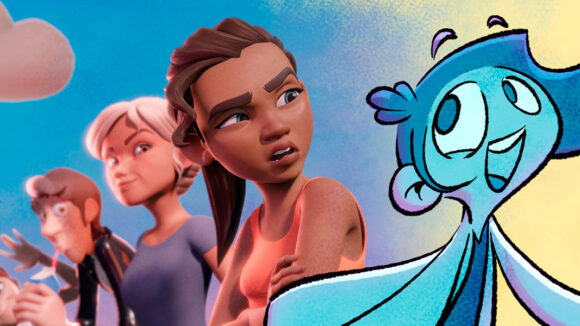 Demo reels are an invaluable tool for impressing one’s skills on potential employers. Rarely do they find a much wider audience than that.

Mònica Eggert’s new character animation reel is the exception that proves the rule. The video, which she posted to Vimeo last month, is not just a technical tour de force, effortlessly flipping between 2d and 3d animation. It’s also ingeniously conceived as a narrative piece in itself — and one that manages to playfully parody movie conventions. Watch it here:

Bar the humanoid rigs, the film is entirely made by Eggert, an animator based in Barcelona, Spain. Since she uploaded it, the video has racked up over 14,000 views and generated buzz within the Spanish animation industry. Below, Eggert tells us what inspired this unusual reel and where she hopes it will lead her…

Mònica Eggert: I know it may sound clichéd, but I’ve always been a creative, artistic person. I’ve always loved everything related to telling a story — not only movies but also comic books, theater … To create something that might make the audience feel emotion is so powerful, but the creation process itself already brings me joy.

I studied animation in my hometown of Barcelona and worked for almost one year on a 2d series. I’ve also done some freelance work related to animation and illustration. However, I still consider myself as a student looking for my way into this industry. I hope I’ll find it!

The idea to make this demo reel came from different factors. I was lucky to be chosen by my mentor Daniel Martínez Lara to do a workshop where you explore your skills and interests, and create your demo reel from zero with his feedback and supervision. His school, Pepe School Land (PSL), has this vision to encourage students to create and develop projects, and it was my love for storytelling and this fantastic opportunity to learn more with him that really pushed me to do this.

The project may have been big, but it may also have been the only opportunity to do something like this, because in the future I would already have professional shots to include.

Also, lesson number one when you’re doing a demo reel: stand out! To catch the recruiter’s attention, not only do you need to have good animation, you also need something that might be remembered — a highlight. For me, animation and all these “artistic mediums” really make sense when you’re telling a story, even if it’s a very simple one: there’s always a character, an emotion. Why not apply that to the demo reel itself?

So, after doing loads of storyboards and animatics, I ended up choosing this idea (which was actually the first I had). It was really focused on the people who would watch it, the character situation and jokes were relatable to this world, and, above all, it really defined me as an artist.

I’ve always had a special love for 2d. That’s why it was my first choice. But some studios and individuals are really pushing 3d into new styles and experimentation, and that’s why I’m becoming more and more interested in this technique. I first studied 2d at Barcelona’s 9Zeros school, where I need to express a big “thank you” to Felip Orozco, who sadly passed away during my time there. He was my big inspiration for 2d: he showed me that the most important thing is to really love and have a passion for what you do.

When I went to PSL and learned 3d, I realized that, even though the two techniques have specific things you must master (like strong drawing skills for 2d and all the “technical computer stuff” for 3d), animation is animation, after all, and you can apply what you learn in one technique to another. At least that is my experience!

My dream job is to do something that really gives me personal rewards and happiness. With this demo reel project I have reaffirmed that, right now, this kind of creation is what is giving me that. So I don’t discard wanting to direct someday, and I’m willing to explore the possibilities of my skills on my exciting new journey, in which storyboarding is also a great option!

One thing’s for sure: I’ll continue creating, even if it’s on personal projects. I’m currently working on an exciting comic series project with Jordi Muntaner — it might be out soon and it makes me pretty excited!