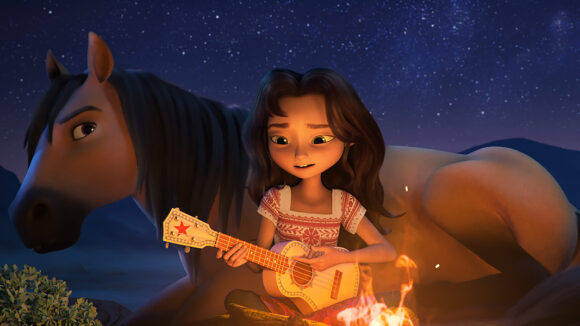 The wild mustang stallion Spirit was first introduced to global audiences in 2002 with DreamWorks Animation’s Oscar-nominated Spirit: Stallion of the Cimarron. In 2017, a new generation discovered Spirit in Netflix’s acclaimed tv series Spirit Riding Free, which won a Daytime Emmy Award and garnered a large and growing fanbase. The series was centered around the character of Lucky, a headstrong young girl, and her horse Spirit, as well as the friendships she forms with her two best friends, Pru and Abigail.

Completing the circle, earlier this year Spirit returned to theaters with the new original feature film Spirit Untamed. Expanding upon the storylines and character arcs from the tv series, the film provided the perfect opportunity to explore the relationships more thoroughly while adding layers of adventure, thrills and emotional depth.

The journey back to the big screen began with producer Karen Foster, who had joined the DreamWorks Animation team as a development executive and co-produced How to Train Your Dragon. After producing multiple short films for the studio, Foster was approached about producing the next chapter of the Spirit franchise. “There were several ideas about what the movie could be, but I was always interested in the film being centered on the origination story of Lucky and Spirit,” Foster says.

When the time came to find the film’s director, Elaine Bogan was the perfect choice. Bogan, who had been part of DreamWorks Animation’s story training program after she graduated from college, has been an avid horseback rider since she was a child. And although she had taken a break from riding in young adulthood, she rediscovered her passion for it after moving to L.A. “It was my first time living away from home and I was told I should check out the Los Angeles Equestrian Center. As soon as I found that place, it became like my second home, and I picked riding back up instantly.”

Before she began directing, Bogan worked as a storyboard artist for various DreamWorks Animation titles, including Monsters vs. Aliens and How to Train Your Dragon. She then went on to become DreamWorks Television’s first female director on Dragons: Riders of Berk. She directed multiple television shows for the studio but was eager to make the jump back into feature films. “The timing of it all was fortuitous because I had come back into development on a different project at DreamWorks and at that time, they were looking for a director for Spirit Untamed,” Bogan says. “The film’s development executive already knew about my love of horses. It felt organic and it just kind of made sense. We had a tight timeline to work with and had to quickly figure out a story.”

Although Bogan’s horseback-riding background was definitely a plus, it was only one of the many aspects that made her perfect for the project. “Elaine knows what she wants as a director and she’s not afraid to say it,” Foster says. “She’s audacious, and we were confident that she had the ability to rise up to any challenge. She’s just wildly talented that way. And, having worked as a storyboard artist for many years, she knows how to tell an emotional story. She’s incredibly hard-working, organized and knew how to prioritize certain necessities for the project. She held on to her artistic visions, and it shows in how vast and rich the final film is.”

When it came to the script, Aury Wallington, the creator of Netflix’s Spirit Riding Free, was a natural choice. “Aury wrote the film’s first draft, which served as a great foundation for the film,” Foster says. “As the story artists were developing the various scenes, Kristin Hahn came on board to help us deepen the emotional story and strengthen the structure of the film, while Aury continued to ensure that the script and the dialogue stayed true to the world of the Spirit franchise.”

Horses are known for being one of the most difficult animals to draw and animate, so Bogan and her co-director Ennio Torresan, Jr. took their crew on a “field trip” to the Los Angeles Equestrian Center. “Before we even got to animation, we wanted the story crew to be exposed to seeing horses’ demeanors, body languages and how they move around in real life,” Bogan says. “And you can only truly experience that by seeing it up close. We met with horse trainers who know a lot about the movements, mechanics and body language, but we also had anatomy lectures with Dr. Stuart Sumida, a biology professor at California State University, San Bernardino. It not only helped the animation team, but he also got into behavioral details, which helped the story artists in creating these horses as individual characters.”

Following these lessons, it became more seamless for the crew to create unique characteristics for the horses, and they even designed one of the horses in Spirit’s herd to be based off Bogan’s real-life horse, Ziggy Stardust. “There are a couple horses in the herd that we tried to give specific personalities to,” Bogan says. “Ziggy was given the personality of the very skeptical lieutenant. He’s sort of Spirit’s second-in-command when Spirit isn’t around. So, he’s wary and doesn’t trust humans very much.”

At first, Bogan was hesitant about allowing her work life to cross over into her personal time with horses. “I was scared worlds would collide,” she says. “However, the further we went, the more I realized this is what storytelling has to be – from life experience and from what’s in my heart. Horses have taught me so much over the years. They taught me that something you love is worth overcoming your fear to get. Our story’s very theme is ‘Being Fearless.’ Learning to communicate, bond with, and steer a beast you’ve never experienced before can be terrifying, but with dedication, the journey and reward are nothing but incredible. Merging those two worlds that I was so wary of colliding turned out to be one of the best experiences of my life.”