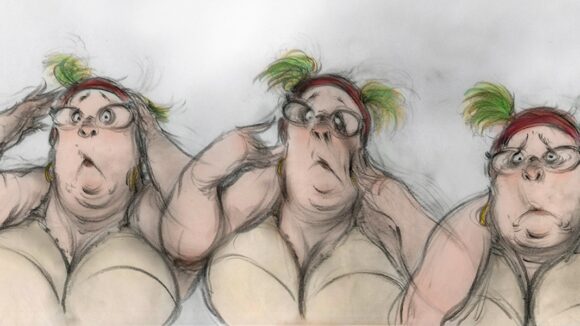 Joanna Quinn and Les Mills are an unstoppable force. With more than 65 festival selections in the last few months, their latest film, Affairs of the Art, and its main character, Beryl, are taking the animation world by storm.

Quinn is one of Britain’s most distinctive animators. Her first film, Girls Night Out (1987), introduced audiences to working-class heroine Beryl, a welcome antidote to the era’s machismo and an unabashed celebration of female sexuality. Since then, Quinn and her writing-producing partner Mills have created three more films about their beloved character: Body Beautiful, Dreams and Desires: Family Ties, and this latest adventure, Affairs of the Art, which marks their first co-production with the National Film Board of Canada.

Quinn grew up in London but made Wales her home. She loves the intimacy and its nation-state mentality. But despite her small-town affections, she’s been recognized and honored worldwide, with retrospectives of her work being staged in cities like Rome, New York, Zagreb, Montreal, Gothenburg, London, Moscow, Hiroshima, and others. Her signature style can be seen not only in her film work, but across her commercial work for clients like Procter & Gamble and United Airlines.

The organic process of creating Beryl

Quinn’s dynamic, fluid style is perfectly adapted to mark the evolving journey of Beryl’s life. Her joy in the female body is evident in every frame, and the themes of gender and oppression are recurring motifs explored in Quinn and Mills’ films.

Working together since 1987, when they founded their production company Beryl Productions International, the team have brought home numerous major awards, including BAFTAs and Emmys, in addition to receiving two Oscar nominations.

So how do they do it? How do Quinn and Mills manage to keep Beryl relevant and alive in audience’s hearts? The secret lies in the authenticity of her character. She’s become such a constant in their lives, particularly Quinn’s. So much so that Quinn finds she’s taking on some of her protagonist’s traits. “I’m actually turning into Beryl,” she admits. “So a lot of the time when I’m talking or something, people say, ‘Oh my god, you looked just like Beryl then.’”

Quinn finds much of her inspiration for Beryl’s character through sketching. Her drawing station, located right by a window near a bus stop, is perfect for capturing all types of people in different moods and postures.

“I’m looking for body language and the way people stand or sit or something,” Quinn says. “You become very familiar with the drawings in your book, so you’re looking at the drawings and somehow they get imprinted in your brain.”

These traits that she picks up through sketching then become characteristics of Beryl, as if through osmosis. This detail can be seen in the way Beryl droops when she’s depressed or moves in a downward motion. Whether audiences notice this consciously or not, it’s something they respond to. As Mills explains, “They can see what the character is thinking without her saying anything, just because of a slump or an eye movement.”

Quinn has a knack for observation on all levels, not just the visual. As Mills notes, “It’s not just the visual observation, it’s listening to the way people talk and say things.” There are several lines in the film that exemplify this: for instance, when Beryl’s father comments that she’s obsessed, or when he says her sister Beverly is obsessed with Roy Rogers’s horse. The intonation and inflections are practiced and precise — something the audience might not consciously note, but which adds to the authenticity.

In this film there’s a lot of lip sync, a process Quinn wasn’t always comfortable with but has now come to love: “I’ve become obsessed with breaking down the movement and seeing patterns in the movement. For me, animation is quite like music in that you’re creating this rhythm … When you’re doing it with voices, that’s when the magic happens. It works. It comes alive.”

And that magic is evident in Affairs of the Art. Animation fans everywhere have fallen in love, and with good reason.

Eager for a peek? Take a look at the trailer below.