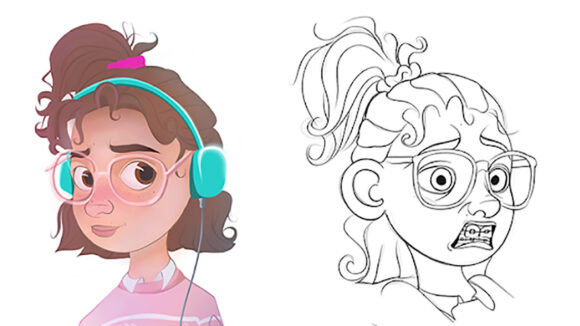 As we head into 2019, the School of Visual Arts in New York City is offering a sneak peek at some of its outstanding in-progress thesis projects from the school’s various animation-driven departments.

SVA’s innovative and practical graduate, undergraduate, and continuing education programs teach both traditional craft and the latest technology skills necessary for students to meet the needs of the industry. Read on to learn more about these amazing projects from the following departments:

Learn traditional and digital 2d techniques in this drawing intensive BFA program with an emphasis on storytelling.

Animation and background art are two things that Peter Muccioli enjoys creating the most, so he is producing a thesis film that will allow these interests to be his main focus. He wrote his comedic story in a sci-fi setting so he can get extra creative and expressive with his environmental designs and animation.

In his own words, “It’s been an interesting project to work on so far, so hopefully it’ll be fun to watch when it’s done!”

Master the creative, technical and narrative skills necessary to meet the growing needs for 3d computer animation and visual effects.

BFA Computer Art student Jenna Spurlock is working hard on her thesis film about an unconfident girl growing up in the 1980s who becomes heavily influenced by a powerful pop star, only to learn that following your own style is always best. To evoke the look of a young girl in this decade, Jenna researched the influence of various female artists from the ’80s and the fun fashion styles that came with it.

Translating these ideas into 3d has required Jenna to recreate the colorful and chaotic look of the 80’s while maintaining a simple, stylistic approach to the film. When Jenna isn’t hard at work on her film, she’s actively planning events and hosting conversations for SVA’s Women in Animation student chapter, which she helped establish and co-leads.

A nationally-ranked graduate program emphasizing creative experimentation and a multidisciplinary approach to making art with computers and emerging technologies.

Undying Love is a 3d-animated short film by MFA Computer Arts student Kaitlyn Fitzgerald. It follows a Cupid’s arrow that delivers both love and death, leading to a tumultuous love story with a zombie twist.

To develop her concept, Kaitlyn has been researching what it means to be viewed as “the other,” “monstrous,” and “different” by society, along with the meaning of love and romantic attraction. Stylistically, her 3d renderings and designs are inspired by stop-motion animation and handcrafted sets, such as Corpse Bride and Paranorman. She’s having lot of fun with the character designs as well — especially with Cupid, who was inspired by cherubs found on late 18th century Puritan gravestones. You can follow her Instagram: @fitz_illustration.

In the Continuing Education program at School of Visual Arts, students learn to give life and motion to ideas and characters in a program that blends the practical, the theoretical, and the creative. Fine arts, stop-motion animation, digital compositing, storyboarding, and special effects makeup are just some of the courses offered.

Dominick Bedasse, a former SVA Continuing Education student, honed his skills by enrolling in several courses that ranged from traditional drawing to digital compositing before applying to graduate school. The work he did as a Continuing Education student was outstanding, and prepared him for graduate level work — and he is now pursuing his MFA in Computer Arts at SVA!

To learn more about the various programs available at the School of Visual Arts, visit SVA.edu.