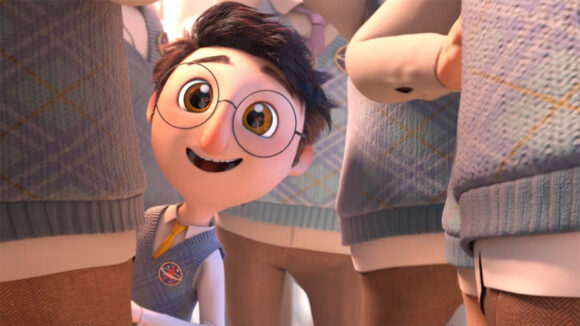 Now in its fourth year, the SVA Premieres screening in Hollywood is the School of Visual Arts’ showcase of the best work created by graduating students from over ten undergraduate and graduate departments at the esteemed art school.

The 2019 SVA Premieres Showcase is free to attend, and the school invites Cartoon Brew readers to attend. Simply RSVP at this link.

From year one, students who have participated in the SVA Premieres have secured interviews with major studios, had their work featured in prestigious film festivals, and have been offered jobs due to industry representatives seeing their work at the event. In the days surrounding the screening, the school immerses students in the industry by arranging visits to film studios as well as media and tech companies (past visits have included Amazon Studios, Buzzfeed, Deutsch, Disney, Warner Bros., and Titmouse Animation), as well as hosting a brunch where students are able to chat with a wide range of industry professionals, many of whom are SVA alumni.

Here is a preview of the films that will be screened at the event:

Master the creative, technical and narrative skills necessary to meet the growing needs for 3d computer animation and visual effects.

BFA Computer Art is screening the following films from their graduating students:

Why z?, written and created by Asher Horowitz , is a CG animated short that follows the lonely last letter of the alphabet as he struggles to find his way in a world that’s constantly reminding him of his place at the end. Asher, currently interning at Aardman Nathan Love in NYC, is excited to keep bringing characters and stories to life that inspire a colorful and brighter future.

Ben and Kat or Kat and Ben Go To Little Lake Fountain, by Elizabeth Whitfield and Nicholas Dimas, is a 9-minute 3D animated short. “We wanted the film to feel like the viewer is just watching a snapshot of some people’s day, filled with moments that are funny. We think that in most human interactions there are so many things that we ignore which are actually hilarious.” -Elizacholas

Papito, by Kenneth Rosen and Sarika Persaud, is the story about Emilio, who wants to spend time with his father by sharing a homemade comic book. Co-Director Kenneth Rosen says, “Sarika and I were inspired by our hard-working fathers and how, even though they seemed extremely busy with work, they would always try to make the time to play with us as we grew up.”

Learn traditional and digital 2D techniques in this drawing intensive BFA program with an emphasis on storytelling.

BFA Animation is screening the following films from their graduating students:

Mt. Sundae, by Katherine Kow, is a film about a girl who encounters a little toast dude who is selling bread in exchange for ice cream on top of a mountain guarded by an angry yeti.

Memory Box, by Emmy Stork, is a film about Myra, a young adult, who is coping with her and her best friend’s deterioration due to drugs through attempts at willful ignorance rooted in childhood memories. However, the reality of the worsening situation seeps through, tainting her flashbacks.

A nationally ranked graduate program emphasizing creative experimentation and a multidisciplinary approach to making art and animation with emerging technologies.

MFA Computer Arts is screening the following films from their graduating students:

Murk, by Xuchen (Aurora) Wang, is a 2D-animated short film about a girl without a shadow. She chases other shadows that do not belong to her, until she finally gets her own shadow.

Reincarnation, by Hao Yen Chuang, is a non-narrative 3D animated short about a ritual in a twisted spiritual world where creatures are celebrating the birth of a new god. This abstract short reflects themes of religion, sexuality, intensive phobia of humans mind.

In the Continuing Education program at School of Visual Arts, students learn to give life and motion to ideas and characters in a program that blends the practical, the theoretical, and the creative. Fine arts, stop-motion animation, digital compositing, storyboarding, and special effects makeup are just some of the courses offered.

To attend the SVA Premieres screening, RSVP here. To learn more about the various programs available at the School of Visual Arts, visit sva.edu.