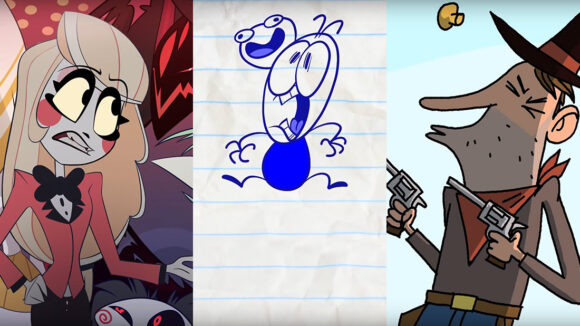 Youtube as an open platform has allowed independent creators to build their brand exactly the way they want it, without any management layers in between. But while running a Youtube animation channel might look like an easy goldmine, to actually make it successful, you need strategy, a lot of luck, and great stamina.

To date, the Pencilmation channel has amassed a total of 4.4 billion views, and is made by a team of more than a 100 people worldwide. Medrano, whose channel has 163 million views, is currently directing a small team to create an original series pilot of 25 minutes, Hazbin Hotel, which is financed by 1,790 of her followers through Patreon. Lieuwma’s channel, which has over 230 million views, is produced largely by himself.

Bollinger, Medrano, and Lieuwma all started their channels out of sheer enthusiasm. “I made the very first Pencilmation episode when I was about 16 years old,” Bollinger recalled, “[after] I watched the Looney Tunes [short] Duck Amuck.” The Pencilmation video gained great traction on Newgrounds, which was a kind of predecessor of Youtube, as some might remember. After Bollinger picked Pencilmation up again as a college project at the School of Visual Arts, he began creating episodes on a regular basis and posting them on Youtube, at which point the idea steadily grew.

Lieuwma, who graduated from the HKU University of the Arts Utrecht in 2005, had made a few cartoons just for fun, and in 2016 decided to upload them under the name of Cartoon Box on his studio’s Youtube channel. “The next week I tried to create another video, and the week after that, [challenged myself] to create one of these Cartoon Box videos every week. I simply continued doing this, for over 130 weeks now.”

Medrano, who also graduated from SVA in 2014, recalled growing her online audience already at an early age – first doing fanwork, followed by original creations. By the time she started her Youtube channel, Medrano already had a dedicated audience. “I don’t know if there’s ever a better strategy for growing a following other than being very passionate and ambitious,” she said. “People respond to passion more than you’d think!”

Tip #2: Be strategic about your uploads…

As factors of making a video successful, Lieuwma mentioned having “the right tags, the right video thumbnail, and the right description, combined with the right time of uploading.” What the ‘right’ choices are in these cases depends on your audience. The creator recommended checking out successful channels and videos within your niche, to observe which tags, length, and other factors work for your audience. Free browser add-ons like VidIQ are helpful for that; it allows you to analyze the results of both your own and other people’s channels.

Lieuwma added one more specific tip regarding sending out copyright claims: “If people are uploading your content on other accounts without your permission, I always ask myself whether this is harming my brand or helping my brand. If it could be helpful, then instead of reporting them, I will ask them kindly to add links to my account. On Facebook and Instagram that really helps my brand. On Youtube I almost always report though, since it’s my main source of income.”

Tip #3: …but don’t wait for perfection

It’s good to think about and prepare your uploads, but if you’re stuck waiting for the perfect strategy or the perfect animated piece, then you’ll never post anything at all. “[With our channel] there wasn’t much strategy in the beginning,” said Lieuwma. “We learned from every video we uploaded.”

Added Medrano, “I still have a ton to learn about all that stuff. I make thumbnails I think look good to me, and I don’t use keywords nearly enough. I’m a brand that doesn’t try to be a brand.”

Don’t let a misfire every now and then get you down, emphasized all three creators. Bollinger shared that after the success of the first Pencilmation episode on Newgrounds, he immediately got to work on a sequel, Pencilmation 2. “[But] much to my dismay, it didn’t garner nearly quite as much attention as the first episode. Still, this sequence of events had a significant impact on my interest in the internet as a platform for creative work.”

Tip #4: Engage with your followers

Youtube allows for heavy engagement with your followers, which has its pros and cons. Bollinger found that “the pros of having more contact with the audience is that you have a better idea of what their interests are and can cater towards them.”

These insights can be as basic as “Most people prefer to watch longer videos above shorter ones,” said Lieuwma. “Almost all Cartoon Box compilations have many more views than the separate weekly new episodes.”

Medrano shared she finds it personally inspiring to engage with her followers. “I have interacted with and even worked with so many people from my audience. Seeing the effect my work can have on people makes all the hardships worth it!” But within this strong engagement she’s had to learn to set healthy boundaries, she shared . “Sometimes you engage with the wrong person and it becomes stressful, or you see some of the more toxic aspects of fandom. Sometimes, for your own mental health, you have to step back and give some space between you and audience.”

There were so many amazing Hazbin Hotel cosplayers at #katsucon2019! pic.twitter.com/rHR5Om2DvN

Focusing on Youtube income alone can be tricky for creators whose livelihood depends on it. Medrano shared, “Sometimes Youtube surprises me with being a more rent-paying number, sometimes it’s practically nothing. It all depends on what I can manage to post. Most of what I post is short, and so doesn’t translate to very much [income].” Youtube’s current algorithm tends to favors longer-format content, which works against animation creators.

Medrano is financing a large part of her Hazbin Hotel pilot through her Patreon, where fans can donate monthly – mostly small amounts – in return for exclusives like work-in-progress materials and live Q&As. “I love Patreon because it gives people a chance to see things and interact with me more than any other place,” she said. “[P]eople can dip out or change amounts anytime they want.” Once it’s time to finance a full season of Hazbin Hotel Medrano says she may run a Kickstarter, but she’s weary of it as “Kickstarters are their own job. Running a successful campaign takes as much planning and work as a show.”

Patreon isn’t for everybody though. For a while Lieuwma ran a Patreon, but found it wasn’t ideal for him. “In a good month of Patreon, I earned less than in a day on Youtube,” he explained. “I think Patreon just isn’t for me, really. It gives me the constant feeling of having to repay my patrons with something extra, which would cost time, and it’s time that I don’t have. So it just added too much extra pressure.” Recently Lieuwma started earning income through his Cartoon Box videos on Facebook, and the creator hopes Instagram will follow suit in the future. There’s quite some audience potential there; the Cartoon Box Instagram has 1.7 million followers – more than on Youtube.

Collaboration can help a creator reach a higher level of quality and posting frequency. For Pencilmation, Bollinger focuses on the business and the concept phase of the animation – all the other tasks are carried out by others.

“The channel grew to a point where I realized that I simply couldn’t handle all of the work alone anymore,” Bollinger explained. “Little by little, I began delegating various components of the process while still overseeing production. One thing led to another and now it has become a 100+ [person] organization of freelancers and full-time staff, but I am still just a guy that works from home!”

When Medrano planned the pilot for her show Hazbin Hotel, she wanted to collaborate with specialists to reach a high production value unusual for online content. “I feel like channels and animators expressly working towards their own [long]-form animated projects are still rare. A lot of Youtube animation is one-off shorts or comedy skits – fully animated episodes are still a bit fresh and new.” The creator adds that “working with such a talented team has been a dream come true, so to me it’s worth every penny.”

Cartoon Box remains mostly a one-man-band for Lieuwma, which gives him the freedom he enjoys. Lieuwma creates an episode from start to finish by himself in more or less three days, but he does test them with his Frame Order studio colleagues, to ensure a certain universality of his gags. “If nobody likes a video in our studio, we won’t upload it,” Lieuwma said.

Don’t expect your channel to become a money-maker right away. “After three months we only had around 40 subscribers,” Lieuwma said. “It took more than 18 months before I started earning a tiny bit. But now [three years after starting the channel] I’m sure that in 2019 I can make a living for one person, just by my Youtube and Facebook income.”

An outside source of income combined with low living costs is key to independently starting your own Youtube channel. Medrano made it work by saving money for two years out of college, working freelance to gather a start-up budget for Hazbin Hotel. Lieuwma confirmed, “It’ll only work out when you have the ability to create videos without earning money for a long time.”

Besides needing great stamina, some luck is also necessary. “My growth on Youtube was very slow for a very long time,” Bollinger recalled. “Pencilmation really started to take off when Youtube began rewarding longer and more frequent uploads, and due to our extensive library of content, we were able to pivot our strategy and benefit greatly from that change.”

While the road of a Youtube channel is uncertain, Bollinger had some soothing words to share when looking back on his journey so far: “I wish that I would have worried less. If you look at the long-term trajectory of the Pencilmation channel and brand, it has been steady growth all along, yet I tend to get caught up in day-to-day concerns. Of course, that is much easier said than done. I will probably never change!”