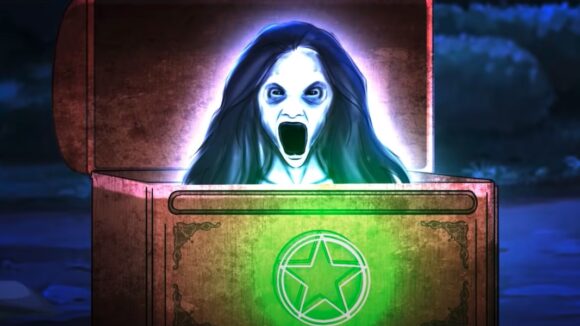 Indian animation is increasingly crossing our radar at Cartoon Brew, but what we see is mostly aimed at young audiences. Which is why, when we discovered the Youtube horror channel Khooni Monday in the run-up to Halloween, our interest was piqued.

Khooni Monday is a hub for Hindi-language animated shorts. The stories riff on a range of sources, from Indian mythology and Bollywood films to Western characters like Slender Man and the Annabelle doll. The name translates as “Bloody Monday,” which is in fact what a counterpart English-language channel is called. Kids’ content this ain’t.

Which makes sense, as the channel’s creator Divay Agarwal set it up to cater to his own tastes. Realizing that Youtube lacked dedicated horror channels for Indians, he decided to launch one with his friends, who happen to be animators. Their videos now routinely get millions of views.

“It is definitely not common to produce animation for adults in India,” Agarwal tells us over email. He is an avowed fan of Pixar but also of anime shows such as Dragon Ball Z, and Japanese series like these are what convinced him to target an older demographic in his country. He and his friends launched TMV Studios — the acronym stands for “the mad virus” — to experiment with genres in animation.

“Most of the [American cg animation and vfx] production work is outsourced to India and [the country’s] animators are actually the ones making movies for the world,” says Agarwal. “What we lack is quality storytelling and risk-taking in our animation industry. We plan to make a big change in that regard.”

Hence Khooni Monday, which scratches Agarwal’s itch to tell horror stories while serving as a test run of the adult-animation business he envisions. “There are endless stories around various horror legends and haunted places,” says Agarwal. “We do our research on various topics, then write a story on a topic we feel will resonate with our audiences.”

Agarwal pens some scripts himself and sometimes works with other writers. He and his colleagues then animate the film together, while he records the voiceover narration. The studio comprises five people in all.

TMV monetizes its channel in various ways. Aside from ad revenue and brand partnerships, it syndicates its content, which is available via Indian satellite tv providers like Airtel and Tata Sky. The studio is in talks with local linear tv channels. The team has also produced podcasts that are available on major audio-streaming platforms like Audible and Gaana.

Meanwhile, TMV is looking to expand into new territories and types of story. As well as the English-language channel, a Spanish one has been launched, and other languages — including Polish — are on the cards. The studio also wants to start producing animated films in the crime, murder mystery, action, and superhero genres. “We plan to make many more content IPs which have a global appeal,” says Agarwal.