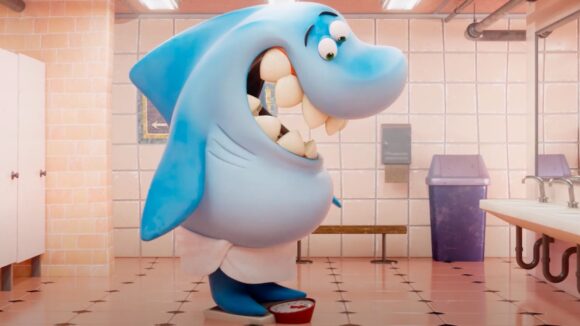 Among the familiar names on the line-up of this year’s Unreal Build: Virtual Production summit — Netflix, Paramount, Industrial Light & Magic — was a relative newcomer. L.A.’s AMGI Animation Studios got going around a year and a half ago, yet already it has the swagger of an old pro.

Colin Brady, veteran animator and AMGI co-founder, gave a presentation at the summit showcasing his studio’s technical approach: a combination of “real-time animation, art direction, and puppeteering.” His aim is to create quality content at “a fraction of the traditional animation times.” Watch the presentation below:

To put it simply, the studio’s process goes like this: motion-captured performers act out facial expressions and bodily movements, which puppeteer the animated characters in real time in the Unreal Engine. These raw movements are applied to a parallel rig in Maya, where the animation is cleaned up. The final animation is then exported back into Unreal to be rendered. The team is focusing on creating expressive cartoon faces, often a weakness in real-time rendering.

AMGI boasts that this pipeline collapses production to “a fraction of the traditional animation times,” without compromising too much on quality. Brady says that frames rendered in Unreal sometimes look indistinguishable from the results of a full-blown rendering engine.

These ideas aren’t entirely novel — we recently spoke to a New York studio, Thinko, that’s combining puppetry, real-time animation, and clean-up in a similar way. What sets AMGI apart is its ambition, as well as the talent it has gathered to realize its vision. It is upfront about the fact that it wants to compete with high-end studios. Its staff know a thing or two about how these studios work.

Brady cut his teeth as an animation director at Pixar, where he worked on Toy Story 1 & 2 and A Bug’s Life. He then moved to Industrial Light & Magic and helped develop motion capture technology on films like The Hulk and Lemony Snicket’s A Series of Unfortunate Events. He is serving as AMGI’s chief creative officer and chief technology officer.

Joining Brady is Teddy Newton, a character designer and visual development artist who has been a key role in Brad Bird projects like The Iron Giant and The Incredibles; he also directed the Pixar short Day & Night. Newton is AMGI’s head of story and character designer. Another industry veteran involved with the studio is Jill Culton, director of Abominable and Open Season, who is serving as a creative consultant.

Among AMGI’s current projects are the series Da Hamstas (working title), which is based on the eponymous Dutch kids’ IP, and the short film Sparkle, which is teased in the Unreal Build presentation. The studio is also at work on a feature.