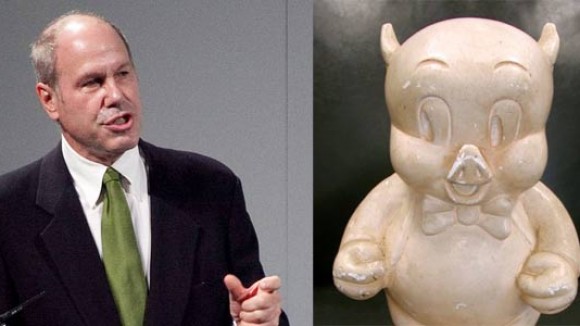 One year ago this week

The Milt Kahl Head Swaggle: “Like a signature, each animator has their own little quirks or trademarks that distinguish their animation from others. Some draw character’s features in a unique way (eyes, hands, etc.), some lean heavily on certain principles or include abstract imagery or gimmicks into their scenes, and some fall back on specific poses or gestures. The “Milt Kahl Head Swaggle” is an example of the latter, and it both intrigues and aggravates me at the same time.”

Five years ago this week Porky Pig Statue Found!: Aside from production cels, how many physical props are still in existence from classic Looney Tunes? Van Eaton Galleries just acquired this piece from the estate of a Termite Terrace animator: It’s the Porky statue seen in the opening titles of Porky’s Hero Agency (1937). Apparently Bob Clampett made several of these and gave them to his top staff.

Ten years ago this week

More Bad News For Michael Eisner: Michael Eisner received a 72.5% no confidence vote from Disney employee 401K plan participants. SaveDisney.com has come up with some new figures that don’t bode well for Michael.