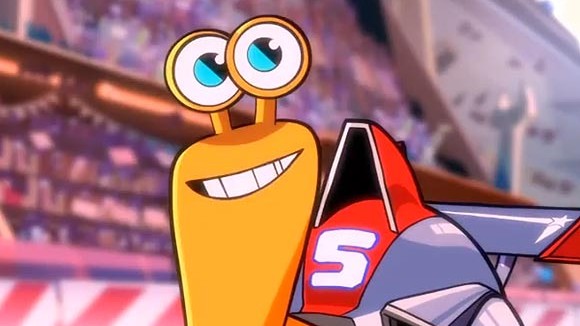 In a sign of changing times, animated programming produced for both Netflix and YouTube has begun to earn a significant number of Emmy Award nominations, competing alongside traditional broadcast and cable series. Turbo FAST, Netflix’s first venture into original programming for children, picked up two nominations for the 41st Annual Daytime Emmy Awards. The series was part of last year’s announcement that the site would work with DreamWorks to produce 300 hours of original programming.

Turbo FAST is nominated in the categories of Children’s Animated Program and Achievement in Sound Mixing-Animation. “It just shows that [Netflix is] really a destination and kids have found it, and that means a lot to us,” Marjorie Cohn, head of television at DreamWorks Animation told Cartoon Brew.

In the two categories in which the show is nominated, Turbo FAST is competing against shows from major broadcast names like Cartoon Network and Nickelodeon. Cohn says that these traditional channels still compete for children’s attention, depending on the mood of the viewer. “Kids are still watching broadcast television for sure, so sometimes they want to put on the television and watch what’s there, and sometimes they have something specific in mind and they go and find it on Netflix.”

The shifting landscape of entertainment began with traditional television shows finding their way to the Internet, but as studios begin to create high-quality content exclusively for the web, the definitions of “online” and “broadcast” have begun to blur. “Brands like Dreamworks or Netflix are going to stand as their brands versus ‘This one is on channel 126’,” says Chris Prynoski, founder of Titmouse, the studio that produces Turbo FAST. “There’s a lot of new media stuff going on, and there’s definitely an eye on trying to make not just TV shows but interactive projects, too.”

The Emmys are trying to make room for interactive works with the New Approaches category, which acknowledges excellence in interactive content. Take for example, The Scarecrow, a viral video with a companion adventure game that was created by Chipotle & CAA Marketing and directed by Brandon Oldenburg and Limbert Fabian at Moonbot Studios. It has been nominated for an Emmy in Outstanding New Approaches – Original Daytime Program or Series. “Scarecrow was always intended to be an interactive bit of storytelling,” explained Fabian, who said that the film and game complement each other, since the film sets up the universe in which the game takes place.

Nominated alongside PBS and HBO online portals focused in kids DIY design and nutritional awareness, respectively, Scarecrow and its fellow nominees show the potential scope of “new media.” “Chipotle reached out to us, wanting to engage, specifically, on an interactive level,” Fabian said. “The film was something that was going to happen, but they were intrigued with the idea of how do they push the conservation further into an interactive space and take advantage of something that was a bit more social.”

There is still a lot of work to be done to recognize the vast range of animated content being produced online, but the Emmy Awards deserve to be commended for their solid effort in expanding the scope of their honors and acknowledging the new forms of Internet animation content. The 41st Annual Daytime Emmy Awards will take place on June 22nd, 2014.