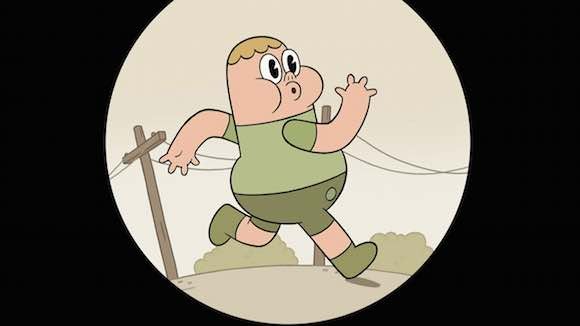 Tomorrow’s new episode of Cartoon Network’s Clarence is a tribute to the iconic rubber hose animation style of the 1920s and ’30s.

In the episode “Goldfish Follies,” Clarence buys a goldfish, but the goldfish bag breaks before he can get home. You can possibly guess the rest from its original title “Clarence Puts a Goldfish in His Mouth.”

Clarence head of story and voice actor Spencer Rothbell told Cartoon Brew that he conceived the episode-long homage as a glimpse of how Clarence sees the world—“through sepia/cartoony glasses”—and that the bulk of inspiration was taken from the work of Fleischer Studios. “I’m a huge fan of [Fleischer] animation from that era—Betty Boop, Popeye, Superman. There are a few classic Disney/Felix The Cat/Tex Avery-style moments as well.”

“The design team did an amazing job. They essentially had to redesign the show in an entirely new visual style for the episode,” Rothbell said.