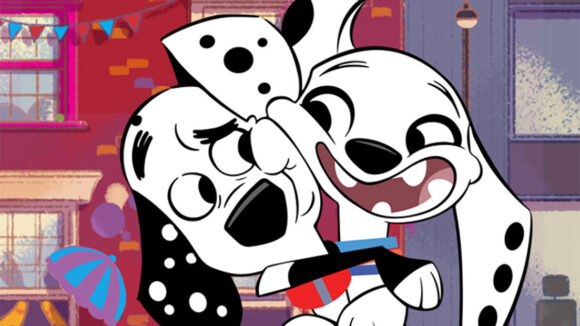 Passion Pictures makes some of the most accomplished animation in the UK, and Disney knows it. The London-based studio, which grew out of the Disney production Who Framed Roger Rabbit in 1987, has already worked on a few shorts for the company, including episodes of Rocket & Groot. So when Disney was looking for a studio to handle its biggest ever animation production in the country – a heritage series based on the 101 Dalmatians franchise – Passion was the obvious choice.

101 Dalmatian Street, which premiered on the Disney Channel UK on March 18, actually emerged from another aborted project. Disney and Passion Animation Studios (Passion’s animation division) had been collaborating on a pilot for Green Park Coachstarz, a show based on the art of James Jarvis. When that fell through, Disney proposed this one instead. “The idea of recreating the original Dalmatians film – in 2d – was really appealing,” said Cara Speller, the show’s executive producer. “We said yes.”

The series isn’t a straight remake, of course. The setting is still Camden (a London neighborhood within walking distance of the Passion studio), but we’re in the modern day. The 101 dogs – many of them descended from the original film’s pooches – live unsupervised at the titular address, where they hang out, hold down jobs, and generally lead more dynamic lives than their ancestors.

The concept came from Helsinki-based Gigglebug Entertainment, who developed it with Disney. By the time it reached Passion, work had begun on the design, and Maria O’Loughlin was onboard as head writer. The studio had never taken on a full series before, and it needed a production partner. It solicited pitches, the best of which came from Vancouver’s Atomic Cartoons.

“We always knew that we wanted to keep all the front-end creative work here,” explained Speller. “We send Atomic a locked animatic [example below], which is an edited storyboard with final dialogue and placeholder sound effects. We also send launch notes on animation and effects. They do the animation and compositing on Harmony; we and Disney see their work at various stages. Then we complete the post-production: music, sound design, final color.” Passion uses Photoshop for the designs and Harmony for the storyboards (with some editing in Premiere). It employs around 50 people on the project, with another 65 at Atomic. Disney itself does no animation, but it is closely involved with every stage of the production.

Atomic’s animators have been very responsive to Passion’s guidance, according to Miklos Weigert, the series’s director. “We were keen on keeping a style related to the movie. Of course, it’s a very different platform and very different type of storytelling. This one is a lot more cartoony, more driven by comedy, so we wanted to make the animation more squashy, stretchy, flexible.” Yet the team still observe basic rules about dog behavior. They bring their own pet dogs (though no Dalmatians) to the office, and study their sounds and movements. Anything that breaks the rules – a character gesturing while moving, say – is ruled out.

When One Hundred and One Dalmatians was released in 1961, it looked unlike anything Disney had made before. The reason was xerography, a technical process developed by animator and all-round innovator Ub Iwerks (together with Xerox). It allowed for animators’ drawings to be printed straight onto cels, cutting out the inking process and preserving the original drawings’ sketchy lines. 101 Dalmatian Street references this aesthetic.

“The original was one of the first films where you saw the artist’s hand,” said Jez Hall, one of the episode directors. “[Before that,] everything was hand-inked by teams of people, so it was a very standard inked line. The Xerox thing retained cleanup, so you could see rough lines… This is a 2d kit-based show, but if you look at the kits, they’ve all got little lines, to make it appear a bit more alive and like it’s all hand-done.”

Xerography also enabled Disney’s artists to copy-paste the dogs with all their spots, which would have been a nightmare to redraw individually. Nowadays, digital technologies perform the same shortcut. On the other hand, 101 Dalmatian Street goes further than the movie in differentiating the dogs – which poses a challenge for designers. “It was a really fun process, because limitation can trigger creativity,” noted Weigert. “We had a lot of fun playing with black and white, or proportions; we introduced new assets, little accessories…”

Nor do the difficulties end there. “It’s the staging and the composition [that’s crucial],” explained Hall. “The dogs are fundamentally white shapes with black spots, so if you get those layered in a shot, it becomes really hard to read. The thing about composition is that at soon as something moves, it breaks – and because this is animation, things move! So we had a lot of back and forth on posing, and line of action, and rule of thirds.” Even so, the team sometimes fudged it: some shots feature more than 101 Dalmatians.

Not all the dogs are speaking roles (yet), but the team has designed 450 characters, 900 locations and 730 props – and they are only 36 episodes in. The first series will comprise 40 11-minute episodes, as well as 10 two-minute shorts (made by Gigglebug) and five 22-minute specials. Overall, the production will run to two-and-a-half years.

“The volume, scale and our ambitions for the series were extremely high,” said Speller. “Our team has met that challenge with impressive energy.” They will need to sustain that energy: Passion’s next project will be its first feature, an animation-live action hybrid which it is developing with DNA Films and Tristar Pictures. Meanwhile, 101 Dalmatian Street will launch across Europe, Middle East, and Africa throughout spring, and in the rest of the world later this year.