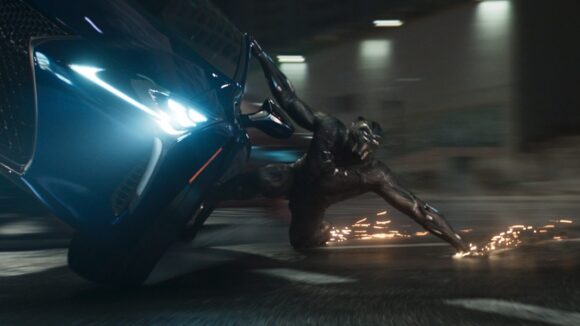 We often hear about visual effects studios working their magic to generate a cg character or in realizing a complex action scene. But how do vfx studios actually piece these incredible sequences together?

Using one of the biggest sequences in Ryan Coogler’s Black Panther – a car chase involving several vehicles through the streets of Busan in South Korea – as an example, Cartoon Brew breaks down how vfx studio Luma Pictures puts it all together.

The sequence features title character (played by Chadwick Boseman) trying out his new kinetic energy suit in the field, to destructive effect, much of it hanging onto the roof of a Lexus LC 500. Luma combined real photography with cg environments, extra destruction effects, and a cg Black Panther to complete the final shots, including one-take that required scores of versions for trailers and the finished film.

How to film a Black Panther car chase

Every new Marvel film seems to amp up the level of action scenes – and the level of visual effects and animation behind them – but what was remarkable about this chase scene in Black Panther was how much actual car crash mayhem was filmed for real, with real cars, real crashes, and a stuntman hanging on the car roof.

This involved filming several vehicles – Toyota 4Runners, the Lexus LC 500, and a Lexus GS F – in two locations, Atlanta, Georgia and the aforementioned Busan. That in itself involved significant work in storyboarding, previs, and then shooting. But it was here that a crucial visual effects decision also got made: consideration for the re-working of the sequence later on in post production. To plan for that eventuality, a dedicated car became a ‘camera array’ car and was used to capture the stretches of roads used to film all the scenes.

“The array car would film the exact stretch of street that they were shooting the car chase in with a horizontal 360 degree view,” explained Luma Pictures visual effects supervisor Kevin Souls, noting it meant Luma could use the footage to reproduce the environment down the track. “They would also acquire full LIDAR scans, and a full-photometric photographic acquisition at multiple exposures, which were HDRIs, so that we had complete texture coverage for every stretch of road where the sequence took place. It was more data than I’d ever gotten before on a show!”

No matter how much real footage was captured, these big Marvel scenes almost always involve a significant digital half. Luma had to construct all the vehicles in cg and also bring into their pipeline a shared Black Panther asset that had been developed by a different vfx vendor.

The Black Panther cg asset, which was originally crafted at Method Studios, was shared amongst all the different vendors on the film, each making the model work for the particular studio’s pipeline. Luma was one of the first to have final vfx shots scrutinized – since the car chase would feature in an early trailer – and so their version of the Black Panther helped shape its final look development.

Although the costumed actor and matching stunt doubles performed on the car chase sets, each time Black Panther appears in the sequence in his fully-masked get-up, this is a digital version. That approach allowed for design changes in the suit, and also the ability to realize the extensive stunts. A number of motion capture sessions with various performers were carried out, with Luma Pictures then animating the final cg Black Panther for the car chase.

A few early shots in the sequence also addressed how the suit would ‘grow’ onto actor Boseman’s body as he runs out of a Busan casino still in a tuxedo in pursuit of the other vehicles. “For those,” said Souls, “we fully replaced the actor’s body from the neck down with a virtual version of his casino tuxedo. Then that tuxedo was run through an effects simulation where we actually used the suit lines to determine where the suit would begin to burn, and tear, and drop away. That revealed the Panther suit underneath as multiple layers, and then we had him jump up and then land on a full cg version of the car that rides on top off. It was probably one of the most complex shots I’ve done in my career.”

Another complex shot in the sequence is one that sees Black Panther landing on the bonnet of a 4Runner as it crosses a bridge, his kinetic energy suit causing the vehicle to flip over. The camera stays with the character as he makes a flying leap onto another car. It was a classic trailer shot, and one that Luma actually ‘finaled’ a number of times for different trailers, as well as for the final film.

Several plates were filmed, including with the camera array and with actors filmed on gimbals for the tumbling parts of the scene, but the majority of the shot is all fabricated and keyframe-animated, with digital cinematography to establish the camera movement. The shot plays in slow motion, and Luma admits that for the sake of a ‘crazy superhero’ moment, the physics were largely thrown out the window.

“One of the things about this shot is that it’s completely cheating,” said Seals. “I don’t mind the fact that that’s the case. I mean, it feels like one of those shots where you start real and then that would be what dictates the shot, but the way that we time-ramped, and the way that we played the 4Runner, and panned to the camera, there was no real way to do that physically accurately without completely art directing those attributes. It really is all about how it creatively sells the dynamism of the shot.”

“I mean,” added Seals, “the kind of lensing that we were going for here meant that that 4Runner was flipping probably a good two stories above the road, and I remember it did present a lot of challenges, because when you’re playing animation and effects to camera, and it’s moving through a light rig that’s ever changing, it presents a lot of challenges in lighting.”

One of the major challenges in the flip shot proved to be splitting up the animation required between character and technical animators at Luma, as Seals describes. “We had technical animators on this because there’s a lot of debris and a simulation component within the animation where the muffler’s rattling and the various debris that’s still attached is moving from a kind of physical simulation level within animation. Then there’s the character animation of Black Panther. So all of this is distributed amongst an animation team so that you give the most care to each part of the shot.”

A further challenge for Luma was simply just how many iterations that flip shot would go through. The studio says it made a whopping 214 versions. “It was actually done by both Luma facilities [in Santa Monica, California and Melbourne, Australia] totally independently,” said Souls. “We did it last summer for one trailer, and then all that knowledge went over and was re-done by the Melbourne team. It was one of the biggest shots we did in the movie.”