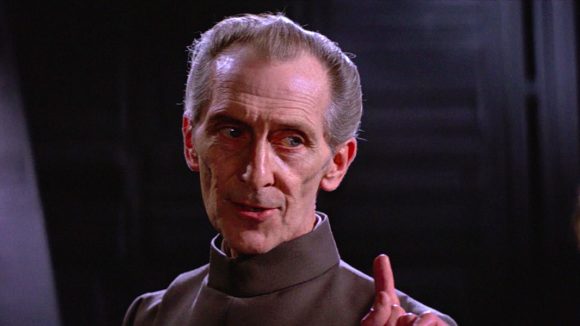 What did you think of the digital Grand Moff Tarkin in Rogue One? It has certainly generated much debate about cg humans in films, the merits of resurrecting dead celebrities, and the ethics of such a practice.

Right now, the Rogue One filmmakers, including Industrial Light & Magic, the visual effects studio behind the work, is being quiet about how the digital human vfx was done. They say they will be able to discuss it more in January.

For people who haven’t seen the new film (are there any of you out there?), Tarkin has a major role in orchestrating the deadly power of the Death Star. He was played by Peter Cushing in A New Hope in 1977. Cushing died in 1994.

Which means ILM had to work all of its ‘magic’ to bring him to life for Rogue One. We don’t know exactly how they did it yet, but in recent years the studio has ramped up its digital character pipeline (Hulk in the Avengers films, Maz in The Force Awakens) and you can be sure they’ve ramped it up even further here. There are also several reports that actor Guy Henry stood in for the character during filming.

Whether you think the cg was successful or not (like any digital characters, many people have weighed in on the ‘Uncanny Valley’ phenomenon), it’s a landmark effort in visual effects, if only because Tarkin is such a major character.

But, it’s certainly not the first time a deceased actor has been resurrected to appear on screen.

When Paul Walker died during the filming of Furious 7, Weta Digital took on the role of respectfully completing his role. They did this with the help of past footage, new shoots featuring his siblings, and a tried and trusted cg approach that the studio has been mastering on many projects.

Similarly, when Oliver Reed passed away while making Gladiator, past takes were stitched together to finish his performance. The same thing happened with Brandon Lee on The Crow.

There are actually countless other examples, many springing up with the advent of digital visual effects – which allows for clever compositing as well as completely synthetic photorealistic cg re-creations of these actors, with or without detailed scan and reference data.

What’s also not particularly new is the discussion about the legality of it all. In a series of papers on these issues, Joseph J. Beard, a professor at St. John’s University School of Law, went through much of the debate. This was in 2001.

The legal issues are many and varied, and can fall under several areas such as copyright, contractual dealings, and the laws of estates and probate. That’s even before we get to the ethical or moral rights considerations about whether Peter Cushing would have wanted to be in another Star Wars film.

And this is even before we talk about the digital re-creation of actors who are still around, either by taking their current performance or ageing or de-ageing them – things that have been done incredibly successfully in recent times.

But again, even this is not necessarily a new consideration. ILM itself famously re-used the digital likeness of actor Robert Patrick it made for Terminator 2: Judgment Day for a scene of a digital lawyer being chomped on in Jurassic Park, and again for Spawn. And right at the end of Rogue One, of course, the very much alive actress Carrie Fisher finds her way onto the screen looking 40 years younger.

In the end, perhaps what’s most on people’s minds is whether we are there yet – can visual effects actually bring to life a deceased actor for a sustained major role? Should we?

These are things that will probably keep being debated for a long time.