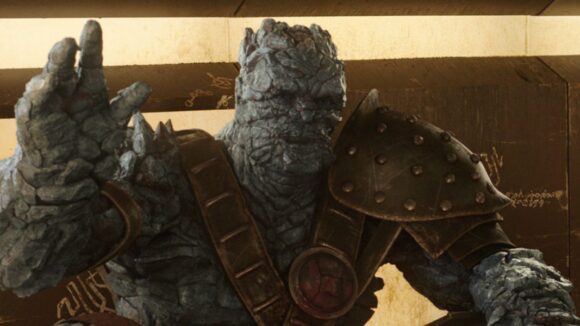 Thor: Ragnarok is the third stand-alone feature outing for Marvel’s Thor character, played by Chris Hemsworth, and this time is decidedly different in terms of tone. Director Taika Waititi certainly infuses the film with more humor and color, and the actors all seem to be having an incredible time.

Some of the biggest laughs in Thor: Ragnarok are reserved for the character Korg, a rock-covered alien who was actually brought to life by Waititi himself wearing a motion capture suit on set. Luma Pictures and Framestore then realized Korg in cg for several scenes.

Cartoon Brew looks at how Korg was crafted via mocap and then animated to be the funniest Marvel character yet.

Korg is a Kronan who befriends Thor on the world of Sakaar. It’s here that Thor is made to fight in gladiatorial combat against Hulk (Mark Ruffalo). Korg tells it like it is, and does so in Waititi’s trademark New Zealand accent.

“Taika likes being in his films,” overall visual effects supervisor Jake Morrison told Cartoon Brew. “These are always a little bit more than the Hitchcock walk-ons, I think it’s fair to say. He likes a cameo, but he also likes a speaking part. With the mocap of it all and the freedom to perform as someone who didn’t look like Taika Waititi, it was something that really interested him – the idea that you could actually disappear into the character.”

Morrison says the director’s inspiration for the performance of Korg came from Polynesian bouncers at nightclubs. “These guys are huge, and then when you talk to them, they’re much more gentle than you might think, and they might say something like, ‘Nice to see you mate, do you want to get in?’ They’ve got that light sort of lilt in their voices against type. I think Taika loved the idea of playing against type for that one.”

On set, Waititi wore a motion capture suit. His performance was captured by infrared cameras built into the set. Korg was designed to be around 7-foot 6-inches, which of course was taller than the director. So Waititi was sometimes given a backpack extension that featured a Korg head mounted on cardboard and placed on the end of a pole.

“This meant that when Chris Hemsworth was actually riffing with Taika he would know where the eye line was, because that’s the important thing,” said Morrison. “You don’t want the eye line to stray down to Taika’s real eye line.”

One of the greatest benefits of Waititi carrying out the role with the other actors was the ability to improvise scenes. At the same time this was a major challenge, because Korg’s strides and actions would ultimately be ‘larger’ than the director’s.

“You can’t just slow everything down to allow that extra movement on set,” noted Morrison. “What it does mean is that you have to take the spirit of that capture for, say, the legs, and then you’ve got to have Taika take five or six steps to go from A to B, and in cg it’s actually three or four for Korg. Then because Korg is made of rocks, there’s a definite snap and a thud to every time he puts his foot down.”

Adjusting for the size difference in Korg’s movements was just one of the challenges faced by Luma Pictures and Framestore. But they still closely followed the director’s original performance.

“We began the animation process by studying Taika Waititi’s onset footage and motion capture data,” said Luma Pictures animation supervisor Raphael A. Pimentel. “By focusing first on Taika’s performance, animators were able to study subtleties unique to him and essentially extract what would be the essence of Korg throughout the film. The first animation pass on all Korg shots were mirrored versions of Taika’s onset performance.”

“Taika is lighter and essentially his gesturing is faster than Korg’s,” added Pimentel. “During Taika’s performance, there were certain timing beats that were difficult to replicate during the animation process. We ended up picking  the strongest beat during the performance and animated around it;  essentially keeping the punchline mannerisms, while slowing the remainder in order to hit Korg’s slower and weightier pace.”

Korg’s rock-like body surface was another challenge. The rocks had to appropriately move when Korg moved, but in a rigid way (Morrison notes that past attempts at rock-covered creatures wearing suits sometimes looked exactly like that – as if the character was wearing a Lycra suit). So the visual effects studios built systems that maintained the rigid feel of rocks, by layering multiple cg pieces on top of each other.

“Korg was a complex character to animate because he is made up of 1,334 individual pieces of rock,” explained Pimentel. “Since rocks don’t deform, every piece of rock needed to adhere to the ones next to it, all while keeping gaps from forming, especially in articulated areas. To achieve this, we started with a body mesh that contained helper muscles to keep volume. Although Korg is not made of muscles, his anatomy behaved as if it did, bulging and contracting depending on his motion. There was also a layer of set driven keys that allowed animators to control individual rocks, if needed.”

When Korg talks, his rock-covered face also had to reflect that need for rigidity but then also deal with phonemes. “This is the stuff that you want really to be Taika, when you look at that face and you look at a raised eyebrow here or a tilted head,” said Morrison. “You can’t ever deform any of the rocks, but at the same time never let it look like it’s clockwork or technical.”

“Korg’s arms are also so bulky,” continued Morrison. “It meant he has that thing that big bodybuilders have where they can’t bend their elbows, and they can’t put their arms straight down by their sides because the muscle mass gets in the way. So we added that detail in.”

Morrison is glad Waititi jumped into the role, and was able to instill so much humor into Korg. But he’s equally happy that the visual effects teams could preserve the performance. “It’s comedy; you’re delivering lines to people that are genuinely laugh out loud moments, and if they’re taken out of the character for just a second and you look at it and you think, ‘Oh, it’s just a cg character,’ then you’ve lost that laugh. I think it’s safe to say both Luma and Framestore really aced it with Korg.”