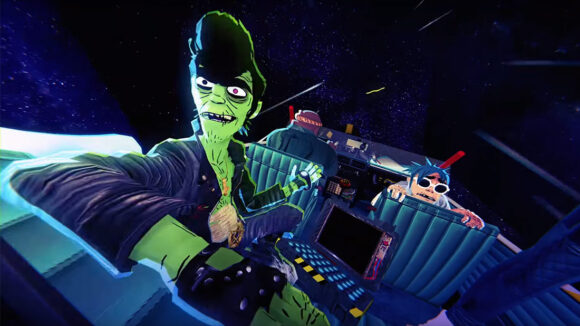 When a mini-episodic ad campaign for watch maker G-Shock featuring Gorillaz hit the web recently, it was quickly apparent that this was a refreshing take on Jamie Hewlett’s original iconic animated characters.

The ads, which combine 2d and 3d animation techniques with illustration and photography as the band make a tour around the galaxy, come from London production companies Blinkink and Feed Me Light and directors BRVTVS, a French animation outfit formed in 2014 by Sébastien Iglesias, Aurélien Duhayon, Thibaud Clergue, and Camille Perrin.

Cartoon Brew found out from some of the team behind the work how the three-part G-Shock “Mission M101” episodic project came to be, and how the classic animated Gorillaz were translated into 2d and 3d for the ads.

The virtual Gorillaz band was created in 1998 by Hewlett, a comic book artist and designer, and musician Damon Albarn. The animated band characters appear in music videos, ‘live’ on stage, in interviews, and in other animated projects. BRVTVS found their way onto the G-Shock ads project via an unusual route.

“While I was working on some post apocalyptic vehicle designs for a project,” outlined Sébastien Iglesias, “I looked to the art of Mad Max: Fury Road and I found the work of Brendan McCarthy, a British comic book author. He was scriptwriter and designer on the film and I sent him an email to ask if they were looking for designers on the next one. A few days later he replied that he wasn’t in the film industry anymore but he really loved Horde, our first BRVTVS short film.”

Fellow BRVTVS director Camille Perrin then heard through a friend that Hewlett wanted to line up a meeting with the collective about a Gorillaz project. “The day of the meeting,” said Perrin, “we introduced ourselves to Jamie and he told us that his friend Brendan McCarthy showed him our work, because he thought that Jamie would love it and that the style could really match with the Gorillaz look.”

The style of the Gorillaz characters in music videos and other incarnations has traditionally been flat 2d animation, often with photographic backgrounds. That look was preserved for the G-shock ads, but, says Perrin, with a new approach to the use of the animation techniques.

“The photographic aspect is made out of patchworks of pictures that create the backgrounds. We tried not to have any perfect perspective or photorealistic backgrounds, quite the opposite, actually, if you look at the earth shot in episode 1, or at the characters’ clothes, for instance. Using a low frame rate rather than doing a 60 fps animation helped adding a kind of stop motion/puppeteering vibe to our photographic/3d/2d mix!”

Director Sébastien Iglesias notes the mix of techniques suited BRVTVS’ own style, and meant they could work fast on what would be three separate video pieces. “The visual ideas came really fast,” he said, “and when we did the early concepts to find the style, Jamie directly approved what we wanted to do. He really trusted us with these films, allowing us a great deal of freedom to express ourselves, and that was really enjoyable.”

“We actually came up with a style frame mixing 2d and photographic elements pretty quickly, as that’s a style Sébastien already wanted to explore and therefore something we already had in mind,” added Perrin. “However, we had to spend a lot of time designing every element we see in the film, from Murdoc’s new haircut to their flat in Tokyo, to the space car, space station, aliens, etc., as well as translating that original style frame into something we could actually achieve in production with 3d characters.”

To achieve the final result, the team started with traditional storyboards and then moved to 3d animatics, before building 2d backgrounds and getting into the 3d animation of the Gorillaz characters. It was important to validate the framing in 3d first to ensure the characters would match with those 2d backgrounds. Iglesias says he then began drawing 2d layouts over the backgrounds, after which a ‘collage’ process began with royalty-free pictures and personal images.

“For episode 1,” said Iglesias, “I used a lot of pictures I took during my trip to Japan – I love to maniacally photograph a lot of props during my travels; I always knew it will be useful one day. This process was pretty long because for each detail that had been decided in drawing we needed to find a matching actual picture. When the car or other 3d props such as the peli case was still in some shots, we directly used them in the collage process as a background element. This technique allowed us to add details onto it with Photoshop and integrate it more in the background.”

After this collage process, a further post-process pass (still in Photoshop) gave reference for the final compositing renders made in After Effects. All the ‘still’ shadows and ambient occlusion effects were manually drawn in Photoshop, with only the moving object shadows from characters or animated props rendered in 3d.

The animation style was partially inspired by Japanese animation, notes BRVTVS director Thibaud Clergue. “We knew from the beginning that we would use a ‘block animation’ style, meaning, no computer interpolations. It allowed us to have more control on the poses, and to stay close to traditional animation. It also made our life easier when doing some crazy camera move in space in episode 2. This choice means less frames for sure, but in our opinion it’s added a nice touch that matched the whole patchwork aesthetic.”

The characters were textured in two different ways. Their clothes were made in Photoshop with a patchwork of photographs, and their skin was made in 3d texturing tool Mari with a flat color and a painted line. The backgrounds were made in 2d, sometimes from a 3d base, with a similar patchwork technique.

“We then rendered the characters flat without any lights or shadows,” explained Perrin, “along with a shadow pass in order to get accurate shadows from the characters on the sets. The characters were then completely ‘lit’ in compositing with gradient overlays and fake rim lights. These rim lights were mostly achieved with a simple alpha offset, and when needed, with a ‘matcap’ (material capture) technique allowing us to project a custom material onto the 3d in After Effects thanks to a UV mapping plugin. The lower frame rate also helped us to get away from an animation that would look too cg.”

So far, episodes 1 and 2 of the G-Shock ads are online, with a third ‘Mission M101’ episodic short on the way (the full credits are at Feed Me Light’s website). For the BRVTVS directors, the project was more than just a commercial one – it tapped into their love of the Gorillaz music and brand, as Iglesias details.

“Gorillaz were a really important band for me in my teenage years and after, as much as in the music as visually. It was my first cd I bought with my own money and I was fascinated by the style, ideas, and richness of drawings and video clips. I think it’s partly responsible for why I choose to work in animation. Because of all that, I had pretty much digested the Gorillaz universe already, and it was a real pleasure to blend it with our BRVTVS visual identity.”