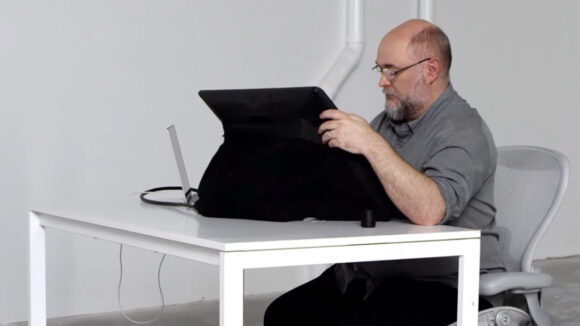 To the general public, if the name James Baxter rings a bell, it might be because of his star turn as a horse in Adventure Time. But to those inside of the industry, Baxter is more commonly known as one of the master animators of the contemporary era.

After legendary stints at both Disney (supervising animator of Belle, Quasimodo, and Rafiki) and Dreamworks (the leads in Sinbad and Spirit, Valka in How Train Your Dragon 2, head of character animation on The Croods), as well as a period inbetween of running his own production company, Baxter has landed in a plum role at Netflix’s burgeoning animation division as the Director of Character Animation.

The news of Baxter’s gig at Netflix was revealed this morning in a Netflix video announcing the launch of its animation division:

Baxter announced the news himself too with a short animation piece:

The title of the job “sounds very highfalutin” Baxter told Cartoon Brew yesterday, “but my mandate is to make sure everything that comes out of Netflix is as well animated as it could be.”

Baxter describes his role as working with creators “to try and find the vision that they want to put on the screen.” He’s also working with Netflix’s partner studios as a mentor and helping them elevate their work to the highest standard possible. (Although Netflix is building a central animation office in Hollywood from which most of its creators will work, its productions are being animated at studios around the world, among them Sergio Pablos Animation in Spain, Cartoon Saloon in Ireland, Pearl Studio in China, and Bron Animation in Canada.)

With the vast slate of projects that Netflix currently has in production, it’s impossible for Baxter to have deep personal involvement in every film and tv series, so Baxter says that he’s “dipping [his] toe in more where it’s needed,” adding, “Some projects are much more like, ‘You just go, do your thing.’

Though Baxter is now technically in an executive position, he still jumps in to animate himself, usually producing character tests in the early stages of production. “I can’t really help myself sometimes,” Baxter says. “I would have a hard time doing a job where I never got to animate anything.”

Baxter says that the projects he focuses on change almost weekly, but the two projects that he’s spending the most time on at this moment are Sergio Pablos’ hand-drawn feature Klaus and an upcoming untitled series by Megan Nicole Dong (How to Train Your Dragon 2, Pinky Malinky), which features a centaur as its lead character.

For Klaus, Baxter has already traveled to Madrid to spend a week working with the film’s animation team and he also expects to animate some of the film’s shots himself.

On Dong’s show, Baxter has been creating tests to help figure out the show’s animation style. “I really, really like her style so much,” he says, “and I’m in love with her sketchbooks and her way of drawing and her artistic voice. I pretty much jumped into Megan’s show. ‘Can I do something? Can I make this move around?'” Baxter’s goal with that series is getting Dong’s personal drawing style translated to the screen without losing too much during the animation process.

Baxter also says he’s regularly working with other creators, including Jorge Gutierrez, Matt Layzell, and Elizabeth Ito. “It’s really fun to have all these different creators be in the same place, bouncing off each other.” He says the energy at the studio is unique among all the places he’s worked because the creators are each producing such uniquely distinct projects, from high-end cg like Chris Williams’ Jacob and the Beast to mixed-media projects like Elizabeth Ito’s still-to-be-announced series, which will mix hand-drawn characters over live-action backgrounds.

A word that Baxter uses frequently in talking about the new role is potential. “There’s so much potential and so much desire to have the creators have a lot of freedom and to create many different kinds of shows and movies. It’s really not Netflix’s desire to have a ‘house style.’ We really want to cast a wide net and produce a lot of things for a lot of different kinds of people.”