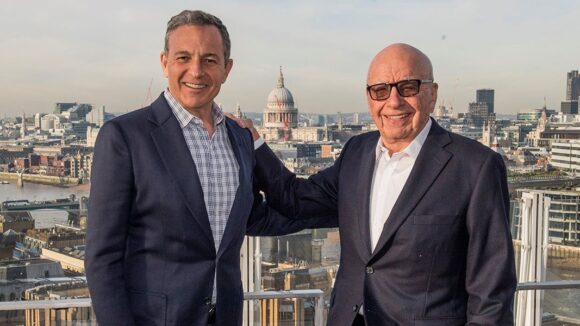 In a deal that Disney CEO and chairman Bob Iger has hailed as an “extraordinary and historic moment,” the Walt Disney Company’s acquisition of 21st Century Fox became official as of today, March 20, 2019.

The acquisition has a total transaction value of approximately $71 billion, and turns Disney from one of the world’s largest entertainment companies into the indisputable 800-pound gorilla of entertainment conglomerates. It also makes Rupert Murdoch (pictured above right with Iger) and his family, who still retain control of Fox News Channel, the largest individual shareholders of the Disney Company. According to analysts, they now own around 7% of Disney.

The acquisition of 21st Century Fox’s iconic collection of businesses and franchises will provide Disney with new assets to increase its international footprint, and expand its direct-to-consumer offerings, which includes Disney+ streaming video-on-demand service launching in late 2019 (expected to include the company’s complete motion picture library), and Disney and 21st Century Fox’s combined ownership stake in Hulu, which totals 60%.

For consumers though, Disney’s purchase of Fox should be deeply troubling, a sentiment best summed up by current Sony chief and former co-chair of Fox Filmed Entertainment, Tom Rothman. “It’s very sad,” he recently told Variety. “I think it’s bad for consumers and anti-competitive — deeply anti-competitive. And consumers will ultimately suffer. What I think the loss to consumers is, is a tremendous loss of originality. That’s the greatest threat the movie business faces.”

The merger will additionally result in the likely loss of thousands of jobs as Disney consolidates the two companies.

Iger has said in the past that Disney’s entry into streaming is the company’s biggest priority, and the merger with Fox enbles the company to accelerate this aspect of its business. Disney now own the rights to major films and television series that will likely be a part of future streaming offerings: Avatar, X-Men, Fantastic Four, Deadpool, The Grand Budapest Hotel, Hidden Figures, Gone Girl, Planet of the Apes, Ice Age, The Shape of Water, The Martian, Rio, This Is Us, Modern Family, The Simpsons, Family Guy, and The Americans, among thousands of other movies and series.

As mentioned above, Fox Animation is part of this merger, which includes Greenwich, Connecticut-based Blue Sky Studios, however, details haven’t been revealed about how that division will be operated now that it’s under the same business as Disney’s much more successful feature animation companies, Walt Disney Animation Studios and Pixar Animation Studios. For now, Blue Sky’s future remains a big question mark.