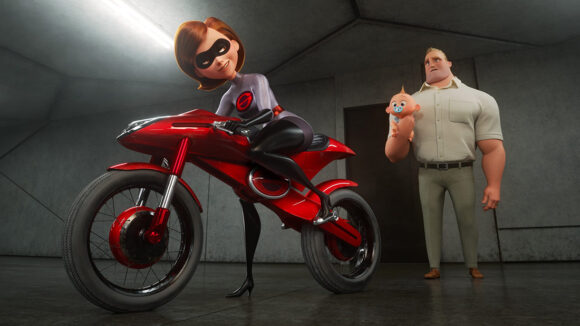 Itching to know everything about how Pixar made Incredibles 2? Your best bet is to attend this year’s SIGGRAPH conference, taking place in Vancouver from August 12-16.

The conference will offer at least eight different panels about the creation of the Brad Bird film, featuring over two dozen creative and technical crew who worked on the film.

SIGGRAPH is a high-level professional event, so many of the panels will focus on specific technical areas of the film’s production, such as how the characters’ clothes were “tailored” and shaded, how the studio used motion blending and motion capture for crowd simulations, how “interactive full-fidelity” hair was achieved, and new approaches to skin simulation used in the film.

Another interesting sounding panel – “Reinterpreting memorable characters in Incredibles 2 — will explore how the characters evolved in the new film to “deliver on qualities that couldn’t be achieved on the first Incredibles,” while still staying true to the essence of the original characters.

Here’s a look at the Incredibles 2 panels that’ll be taking place at SIGGRAPH:

Dressed for saving the day: finer details for garment shading on Incredibles 2

A major design goal of Incredibles 2 was to add greater details to the characters’ clothes than in the original film. Two methods that helped us achieve this were Bump-To-Roughness to help preserve finer illumination details in the clothing, and curve procedurals to add realism to the garment shading.
– Trent Crow, Junyi Ling, Michael Kilgore

This talk describes how Pixar’s character tailoring and shading teams created the fashionable costumes of Incredibles 2, collaborating with many departments. We dressed a large number of distinctive characters for both the Civilian and Super worlds, and found a balance between stylized yet realistic form, shading, and movement.
– Aimei Kutt, Fran Kalal, Trent Crow, Beth Albright

The ‘extra’ touch on Incredibles 2

USD shading gives us lots of flexibility and provides the immediate basic shading for the BG human skin and hair by default. Maintaining the master asset file for updates, debugging, and additional feature deployment was easier than inspecting numerous individual assets. This workflow is more efficient than what we had.
– Kiki Mei Kee Poh, Michael Kilgore, Tom Wichitsripornkul, Gary Monheit

Robustly simulating the dynamics of skin sliding over a character’s body is an ongoing challenge. We have found that many problems can be addressed by performing 2D ray-tracing over the surface of the mesh. The approach is fast and robust, and has been used successfully in Incredibles 2.
– Ryan Kautzman, Gordon Cameron Theodore

On Incredibles, we leaned on 2D drawing and design techniques to drive the way we modeled and rigged. For Incredibles 2 we strove to redesign the characters to deliver on qualities that couldn’t be achieved on the first Incredibles, while still staying true to the essence of these legacy characters.
– Nancy Tsang, Jacob Speirs, Rich Hurrey, Salvatore Melluso, Mark Piretti, Lou Hamou-Lhadj, Kevin Singleton

For more info on attending SIGGRAPH 2018, visit the conference website.