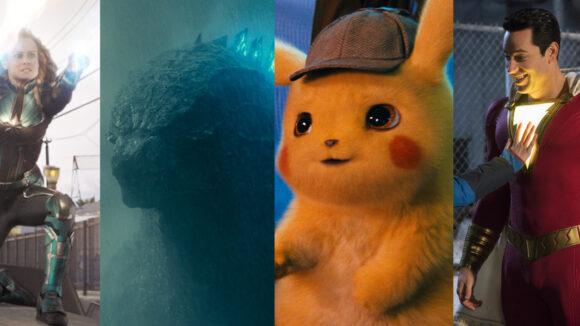 Seven of the top ten films at the U.S. box office last year were vfx-driven films, and those numbers are unlikely to decrease in 2019. Legions of visual effects artists are working away right now on some of the most anticipated film releases of 2019.

Like our preview of upcoming 2019 feature animation releases, Cartoon Brew highlights some of these upcoming films that look set to incorporate innovative vfx and hybrid animation/live-action approaches.

Marvel’s set of releases – three in 2019 – along with a slew of monster movies, sequels, and live-action adaptations of animated classics and video games, are the key trends this year in vfx and hybrid films.

It may have changed release dates a couple of times, but Alita is still a much-anticipated film from Rodriquez and producer James Cameron. It’s based on Yukito Kishiro’s manga Gunnm, and features a completely computer-generated main character in Alita (a performance captured Rosa Salazar) and many other digital creatures and characters. Weta Digital leads the vfx effort on the film.

Brie Larson is the latest actor to join the Marvel Cinematic Universe; and here she takes the reigns of Marvel’s first female-led superhero movie. Notable vfx/cg highlights look to be some classic fight scenes, and the digital de-ageing of Samuel L. Jackson as a young Nick Fury for lengthy stretches of the film.

Yes, Disney is going full bore into re-making its animated classics into live-action films this year. Burton’s re-imagining of the classic hand-drawn animated movie incorporates a photoreal elephant and other creatures and characters. MPC, which worked on The Jungle Book and is the lead vfx vendor on the upcoming The Lion King, also leads the pack here.

Warner Bros. and DC Comics are often considered as being behind the Marvel juggernaut in terms of successful translations of comic book characters to the silver screen, but Aquaman and now the off-beat Shazam! – in which a teenager transforms to an adult superhero – are looking to bring a change in perception. Look out for some seamless digital double vfx.

The 2019 Hellboy is a reboot of the film series, based on the Dark Horse comic. Actor David Harbour underwent an extensive make-up process to transform into the character, with the film also showcasing many cg creatures.

Arguably shaping up as the biggest live action release of 2019, Endgame is the conclusion to the cliffhanger-infused Infinity War. It will feature more of the breakthrough and emotionally-charged cg character Thanos – performed by Josh Brolin – plus several other synthetic creatures, characters, vehicles, and locations.

Ryan Reynolds voices Detective Pikachu in this live-action take on the classic Pokémon character. Translating the 2d likeness of Pikachu into a furry 3d character must have been a major challenge for the vfx vendors on the show — MPC and Framestore are the leads. The project is being helmed by director Rob Letterman, who was a director on the animated films Shark Tale and Monsters vs. Aliens before working on live-action films with plenty of vfx such as Goosebumps and Gulliver’s Travels.

This re-make of the 1992 animated feature seems well-suited to visual effects — a flying carpet, a magical genie, a monkey, a parrot, and an ancient city to populate. Will Smith is in the lead role as Genie, with Naomi Scott as Jasmine and Mena Massoud as Aladdin. ILM is the principal vfx vendor.

Godzilla: King of the Monsters

The trailers seem to give a lot away so far by showing a lot of the moments in this new Godzilla film, which stars Millie Bobbie Brown, Vera Farmiga, Kyle Chandler, and O’Shea Jackson Jr. But ultimately that’s what monster movies are all about. MPC, DNEG, and Method Studios are some of the major visual effects studios involved.

The X-Men films have been on our screens for nearly two decades, and have always capitalized on extensive visual effects to demonstrate key mutant powers. That looks set to continue with Dark Phoenix, which focuses on the dark powers of Phoenix (Sophie Turner). The film has been delayed from its initial release last and apparently went through a set of re-shoots before locking in this U.S. summer release date.

Tessa Thompson and Chris Hemsworth are the leads in this Men in Black re-boot. The original films had a strong sense of creature design, and regularly utilized practical effects combined with digital. Audiences are likely hoping for more crazy creatures here, too. DNEG, Sony Pictures Imageworks, Rodeo FX, and Method Studios are among the effects facilities on board.

Bringing Tom Holland on as Spider-Man had already revived the franchise, as had combining it with the Marvel Cinematic Universe. And now the artistic success of the animated Spider-Man: Into the Spider-Verse has probably boosted that world, again. Far From Home will come after Avengers: Endgame (releasing in April), so more will be known about what will make up this movie then. Like many Marvel films, this is set to have multiple vfx vendors.

One of the most impressive things about the Fast & Furious franchise is the willingness of the filmmakers to shoot as many stunts for real as possible. However, a large visual effects component has been present in all of the films so far, and that should be the same in this spin-off featuring Dwayne Johnson and Jason Statham. DNEG is the lead vfx studio.

Andy Muschietti’s It adaptation did incredibly big business in 2017 and scared audiences silly. It also used digital visual effects in just the right way to enhance practical creature gags and add more scares only where necessary. Indeed, many were surprised at the amount of cg in the first film, which mixed nostalgia and horror to full effect.

Will Smith takes on a younger version of himself in this Ang Lee thriller. We’ve written previously how Disney once looked into making a version of this movie. Now, cutting-edge cg human and/or de-ageing effects techniques look set to be the main methods that will be used to bring the story to life. Weta Digital is the lead facility, and they’ve been at the forefront of digital humans in films such as Furious 7.

Blur Studio alumni Jeff Fowler is handling this live-action take on Sonic, which stars Ben Schwartz as the voice of the Sega video game character. Some strong reactions occurred via the first posters for Sonic, in terms of his legs and furry coverings, but it was always going to be a challenge to translate the blue hedgehog to a living-breathing character.

Not too much is known about the plot of Deadpool director Tim Miller’s Terminator reboot. It sees the return of Linda Hamilton, and also stars Natalia Reyes and Mackenzie Davis. Arnold Schwarzenegger is also back. The franchise has, of course, pushed mechanical, practical, puppet, and digital effects since its inception.

Colin Trevorrow was the original director of Episode IX, until he was replaced with Abrams, who also directed The Force Awakens. Since Abrams’ first ‘new’ Star Wars film, the visual effects team from ILM (and its partner studios) and the special and practical effects teams have often combined for seamless final effects shots; an even more recent trend is the return of rear projection and even adding miniatures into the mix.