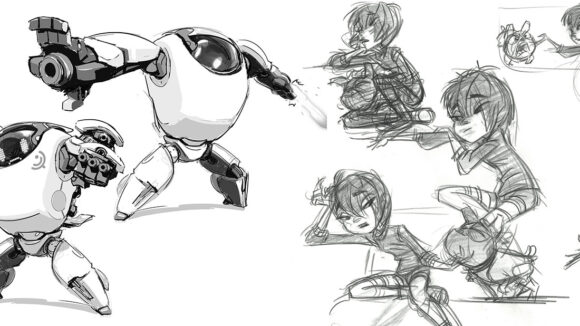 Next Gen, a Canada-China co-production, will premiere on Netflix this Friday, September 7.

Directed by Kevin Adams (art director, Free Birds, 9) and Joe Ksander (animation director, Yogi Bear, 9), Next Gen tells the story of an unlikely friendship between a rebellious girl, Mai, and a runaway combat robot of the future named 7723 as they battle the evil CEO of a tech company who is bent on world domination. As the story progresses, 7723 must choose between the memories he cherishes and the weapons he needs to defend it, while Mai herself must choose between saving her friend and saving the world.

This exclusive gallery of art provided by Netflix offers a sneak peek at the film’s graphic develpment. The film was animated by Canada’s Tangent Animation, which has studios in both Toronto and Winnipeg.

Adams and Ksander hired Craig Sellars (Guardians of the Galaxy, Welcome to Marwen) as production designer. Says co-director Joe Ksander, “Craig is a concept artist and production designer, who mostly works in live action films. When we asked him to help us design the movie, he said, ‘Well, I don’t do animation.’ But we explained, ‘We don’t want it to look like animation. We want it to look like Parallax View and The French Connection. And he loves the 70s.”

Sellars worked alongside Tangent art director Richard Chen and concept artist Thomas Pringle, to come up with a retro-future aesthetic that referenced those seventies films, but also later neo-noir works like Blade Runner and Akira.

In designing the city of Grainlaind, where the film is set, Ksander says they were inspired by the original pitch written by Olivia Hao, who described a high-tech city where everything was agriculturally inspired. “It’s a little bit China, little bit ’70s brutalism, a little North American, and a little Amblin film. It’s a fictional future retro-future city, somewhere in the Pacific Rim, but also inspired by the Los Angeles of Blade Runner. In fact, we call it ‘Happy Blade Runner.’ Craig [Sellars] and Richard [Chen] started with a sort of 70s look and worked their way out.”

Careful consideration was given to developing the personality of the main character, Mai, with co-director Kevin Adams speaking of the desire to give her a nuanced performance.

“There’s usually a slightly sad expression before she gets mad – and she doesn’t want to show that,” says Adams. “So she reacts with true sadness, and then turns that into anger. It’s subtle, it’s something we all have seen in people our whole lives, and it’s a detail that goes a long, long way. If you just read what was written, versus what we see in her face, thanks to these great animators, it tells us a lot more about why she is the way she is.” (Tangent’s animation team was led by supervisor Adam Beck, and leads Rob Silvestri, Jessie Lickman, and Garfie James.)

Similar effort was put into developing the robot lead, 7723. As the story progresses, so does his look, with his facial expressions evolving from robotic stiffness to emotional expressiveness.

“It was an interesting challenge for the animators, who, just like in shooting a live-action film, don’t animate in sequence,” explains Ksander. “They had to map out where they were in each scene of the film, to know which tools they could use and which they could not yet, like ‘Oh, no eyebrows yet, so let’s keep his eyes simple.’ And they did a brilliant job of it, keeping track of where 7 was on that journey. It’s far more difficult than doing with a human character, like Mai, who is also on a journey. They had to design 7’s journey from scratch.”

The designers also made use of what they call “tech joy” – seeing parts on 7 that not only look cool, but can transform and actually function. “We love robot toys,” said Ksander. “But when you combine that with a 70s consumer product feel, and have them transform into a high tech mechanism, it’s just fun to watch.” The Chinese design team even took the extra step to build a lifesize 7 model, with working parts, to really understand how the character worked.

The entire world is packed with robots who perform different functions, a throwback to the pre-computer ’70s and ’80s where everything from knives to doors were electrified. “There’s a seductiveness to using technology to solve all your problems, and we have fun with it,” says Ksander, pointing out how Mai’s toothbrush nags her to brush her teeth, and the house’s mailbox is unrelenting with its repeated announcements of “You’ve got mail!” as the owner passes by without retrieving it.